This article is about the in-game faction. For the draenei city of the same name, see Exodar.

Exodar is the faction associated with the Exodar, the enchanted capital city of the draenei, built out of the largest husk of their crashed dimensional ship of the same name. It is located in the westernmost part of Azuremyst Isle. The Exodar faction leader is Prophet Velen, who is located near the battlemasters in the Vault of Lights.

The zones of Azuremyst, Bloodmyst, Swamp of Sorrows, Hellfire Peninsula, and Zangarmarsh offer many of the quests for gaining reputation with Exodar. 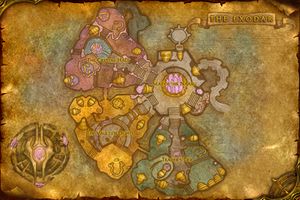 , located in the Seat of the Naaru in Exodar. At all reputation levels, he sells the

[Exodar Tabard], which can be used to champion Exodar in dungeons for additional reputation.

Exalted with Exodar is one of the requirements for achieving the title of Alliance Ambassador.