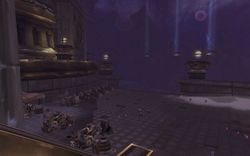 Expedition Base Camp is the first subzone of Ulduar located at the entrance of the instance. It is literally the base camp for an expedition composed of Brann Bronzebeard's Explorers' League and a group sent by the Kirin Tor. Shielded from Yogg-Saron by a reflective magical shield, it contains a group of hired goblins and gnomes working on building siege vehicles from salvaged Titan technology, as well as the commanders of the expedition. A Lore Keeper of Norgannon, similar to the one in Uldaman, is being investigated at the center of the camp, and will activate Ulduar's orbital defenses at the player's discretion.

Activating secondary defensive systems will result in the extermination of unauthorized life forms via orbital emplacements.

You are an unauthorized life form. Please confirm.

Backup deactivation for secondary systems can be accessed via individual generators located on the concourse.

Enabling the machines by talking to Brann
It's a good thing you guys showed up! The Iron Dwarves have pushed us back to this location, and we're barely managing to hold the line here.

Even worse, they've begun to power up their magical defenses. If we don't attack soon, they'll be able to annihilate us in the blink of an eye!

We've managed to rebuild several siege machines, demolishers and motorcycles from the Alliance and Horde expeditions that were here before us. However, all of our pilots died in the last assault.

You must take the vehicles and storm the gates of Ulduar!

Please, <name>! You're our last hope!

First mob pulled
Brann Bronzebeard says: The iron dwarves have been seen emerging from the bunkers at the base of the pillars straight ahead of you. Destroy the bunkers and they will be forced to fall back.

First mob killed
Bronzebeard Radio says: There are four generators powering the defense structures. If you sabotage the generators, the missile attacks will stop!

Near the Tower of Life
Bronzebeard Radio says: You're approaching the tower of Freya. It contains the power to turn barren wastelands into jungles teeming with life overnight.

Near the Tower of Flames
Bronzebeard Radio says: This generator powers Mimiron's Gaze. In moments, it can turn earth to ash, stone to magma--we cannot let it reach full power!

Near the Tower of Frost
Bronzebeard Radio says: This tower powers the hammer of Hodir. It is said to have the power to turn entire armies to ice!

Near the Tower of Storms
Bronzebeard Radio says: Ah, the tower of Krolmir. It is said that the power of Thorim has been used only once... and that it turned an entire continent to dust.

Near a RX-214 Repair-o-matic Station
Bronzebeard Radio says: It appears you are near a repair station. Drive your vehicle on to the platform and it should be automatically repaired.

Unused quote
Bronzebeard Radio: The Control unit for the missile generator is on the top floor of the tower. If you can find a way to get up there, you can shut it down yourselves!