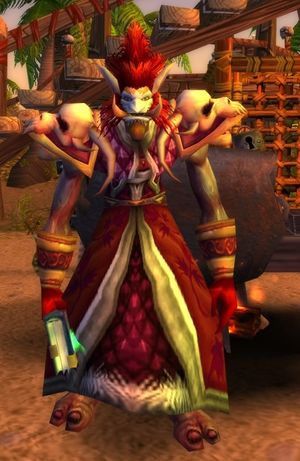 Exzhal is a Zandalari troll who was originally found as a level 60 quest giver on Yojamba Isle in Stranglethorn Vale as a servitor of King Rastakhan.

After returning home to Zandalar following Hakkar's defeat, Exzhal overplayed his victory with Zul and "may have said some things in public that did not go over well", resulting in his demotion to a simple treat vendor in the Yojamba Exchange in Dazar'alor.

Greetlings, <class>. I am Exzhal. I was once the Servitor of Rastakhan. Now I am the server of tasty treats.

You would be wise not to disrupt King Rastakhan's groove, even by accident. For de consequences can be truly dire.

Show me your wares.

What is or was Yojamba?

Yojamba Isle was an expedition many years ago to Stranglethorn Vale. I was part of the forces who crushed the return of Hakkar to this world. We provided armaments of glory to de heroes who fought that vile abomination of a loa.

When we returned victorious to Zandalar, I made de mistake of overplaying my victory with the Prophet Zul. I may have said some things in public that did not go over well.