Eye On the Prize 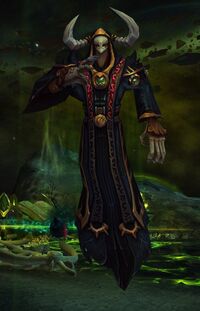 This demon is useless. I have been using the Scythe of Souls on it, but so far, it has resisted my inquiries. We will see how long that lasts.

I have a different idea...

There is a fresh inquisitor demon just ahead. They are horrific fel casters who see through their floating eyes and specialize in dark pacts. If you steal its power, Jace Darkweaver could use some of it in his ritual to spy on the Legion.

Better yet, you will gain its power by ripping it from its smoking corpse.

The following will be cast on you:

<Name>, I would salute, but I'm in the middle of a ritual.

Now to complete my ritual and spy on the Legion's leadership.

On quest accept
Allari the Souleater says: Good luck. I will make my way up to the foothold as soon as I am done with this demon.