The Eye of Aman'Thul in Dalaran. 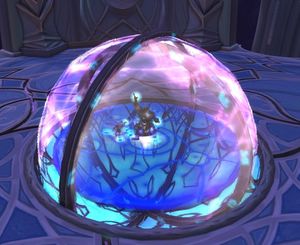 The Eye of Aman'thul (or the Eye of Aman'Thul)[1] is one of the Pillars of Creation, and it came from the titan Aman'Thul.[2] The Eye can channel immense amounts of arcane magic and has power over space-time, having shown the ability to create massive portals and grant those using it powerful temporal magic.

After the Highborne found the Pillars while hunting artifacts throughout Ancient Kalimdor, they guarded them in the Vault of Antiquities in Suramar. During the War of the Ancients, Grand Magistrix Elisande and her allies in Suramar, opposing Queen Azshara, used the Pillars to stop the Burning Legion from creating another portal in the Temple of Elune.[4] After their success and still in the possession of Grand Magistrix Elisande and her Highborne followers, the Eye of Aman'thul was used to create the Nightwell, a fount of arcane magic,[5] and a shield surrounding Suramar City to protect it from the Legion.

Ten millennia later after the Great Sundering and during third invasion of the Burning Legion, the Eye could be found within the Nighthold.[6] Gul'dan stands on it within the Font of Night atop the Nighthold's Nightspire. It is teleported to Dalaran and placed on the floor of the Portrait Room due to its size.[7]

The Eye of Aman'thul was brought to the Tomb of Sargeras, alongside the other Pillars, in order to close the Burning Legion portal.