For other uses, see Eye.

The Eye of Eternity (also known as EoE) is the final instance of the Nexus in which the final (and only) boss is the blue Dragon Aspect, Malygos. The fight against Malygos is comparable to the fight against Onyxia in that he is a solo raid boss housed within his own instance.

From within the safety of his personal domain, the Eye of Eternity, Malygos coordinates a crusade to reestablish his dominance over the arcane energies coursing through Azeroth. In his eyes, the foolish actions of the Kirin Tor and other mortal magi have plunged the world into chaos, and the abuse of their powers will no longer be tolerated. Threatened by the Spell-Weaver's brutal tactics, the Kirin Tor has allied itself with the red dragonflight. Together, the two groups closely observe Malygos, searching for a way to thwart his campaign and strike out at the Aspect of Magic, but thus far the elusive Spell-Weaver has proven difficult to engage.

At Wyrmrest Temple, the ancient meeting ground of the dragonflights, Alexstrasza and the ambassadors of other flights have discussed Malygos' recklessness and reluctantly concluded that he is beyond the point of salvation. With the red dragons' assistance, Azeroth's heroes may be able to accomplish what has formerly been unthinkable: challenging the Spell-Weaver from inside the Eye of Eternity. Sustaining the safety of Azeroth depends on Malygos' defeat, but his end will also herald a new age: a world of unguarded magic, absent of the Dragon Aspect powerful enough to watch over it.[1]

Thanks to Tarecgosa it is revealed that Arygos is working with Deathwing.

However, there is a difference between the in-game and book version of this event. When Kalecgos became the Aspect, Arygos flew into the Eye, where he met with an alternate timeline version of Aedelas Blackmoore. As Blackmoore mounted Arygos, however, he plunged his sword into the back of the dragon's skull, killing him. The Twilight Father used Arygos's blood to activate the Focusing Iris and siphon the magic from the Nexus into the massive chromatic dragon Chromatus, bringing it to life.

Hagara the Stormbinder to ambush the heroes at the Eye.

Serving the Burning Legion, Archmage Xylem came here where he could use the Focusing Iris to wreak untold havoc on Azeroth's ley lines and siphon their energy directly into himself. Drained of magic, Azeroth would be ripe for destruction by his demon masters and his power would become limitless.[2] 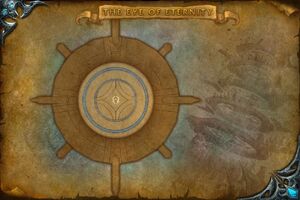 Map of the Eye of Eternity 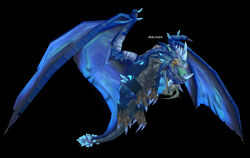 The only boss in the Eye of Eternity