Eye of the Storm

For the former shaman talent, see

Eye of the Storm (EoS for short) is a 15 vs. 15 battleground located right above the Netherstorm.

Eye of the Storm is a resource race battleground with elements of Capture the Flag, featuring 4 capturable bases and a flag in the center. The overall goal is to be the first team to score 1600 points, which can be gained by holding bases or capturing flags. Players can queue for Eye of the Storm from level 15, through the PvP interface.

“Eye of the Storm” would be a florid name for most regions – but for the floating isle suspended high above Netherstorm, it’s just right. Coruscating mana storms suffuse the island’s towers with energy, even as they wear away the barrier between Outland and the Twisting Nether, realm of the demonic Burning Legion.

These nexii of power (and the Eye’s proximity to the Naaru fortress of Tempest Keep) make an otherwise barren rock irresistible to the Light-worshipping draenai refugees of the Exodar and the driven blood elves of Silvermoon City.[1]

Hovering high above the ravaged landscape of Netherstorm is the island known as the Eye of the Storm. Eye of the Storm is a 15 vs 15 domination battleground, where each side attempts to control the Mage Tower, Fel Reaver Ruins, Blood Elf Tower, and Draenei Ruins for as long as possible. The draenei seek to claim it due to its proximity to the naaru's mysterious vessel, Tempest Keep. This battlefield is coveted by the blood elves for its rich energy deposits. 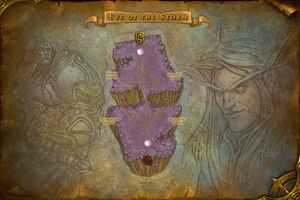 Map of the Eye of the Storm. 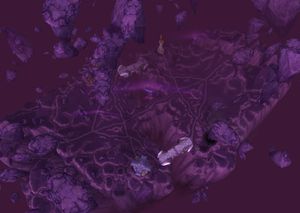 Eye of the Storm from above. 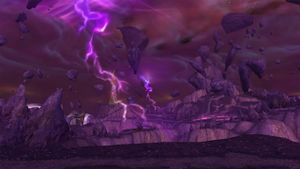 Eye of the Storm is a battleground which combines the overall resource race of Arathi Basin with the Capture the Flag mechanic of Warsong Gulch.

The main objective for each team is to hold as many towers as possible, much like in Arathi Basin, and then to score points by bringing the flag from the center of the map to one of the those towers. The towers work much like those in the Eastern Plaguelands or Hellfire Peninsula: players stand in them to capture them and the more people standing in them the faster the capture goes. More towers held increases the potential to score points. Each flag return to a friendly tower rewards points depending on the number of towers controlled by the team. The game ends when one side reaches 1600 points. If the flag carrier dies (similar to Warsong Gulch) then the flag is dropped and can be picked up by any player. Thus it is possible, and sometimes tactically advantageous, for one team to allow the opposing team to pick up the flag initially, then kill the flag carrier and seize the flag, returning it to one of its towers and scoring a flag capture. If the flag is not promptly picked up after being dropped, it will return to its spawn point (much like Warsong Gulch). Again, a player may return the flag to any tower owned by their team, so holding many towers is helpful not only in scoring points, but also in creating more options in retrieving the flag.

The four areas of the battleground are as follow: the Blood elf tower, the Fel reaver ruins, the Draenei ruins and the Mage tower.

Falling (or jumping) in the void between the land masses kills any player, after a short fall. This doesn't cause any durability penalty. 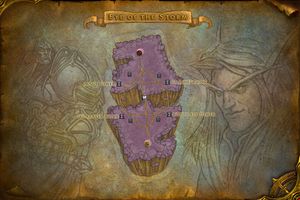 The map plus tactical objectives. 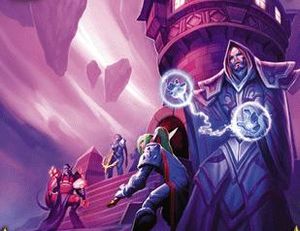 The Alliance takes the Mage tower.

NB: Based on the opposing faction controlling whichever towers you do not, neutral towers are not included in the calculation for either side

One often used strategy is to have one or two people capture each tower on the starting side of the battleground at the beginning of the match, with the rest of the team quickly pushing to the flag and gaining control of the middle. However, this strategy only works when the other team uses the same strategy. If the other team goes for towers while your forces are in the middle, you will lose the game in mere minutes as the other team racks up 10 points per second and your team is standing there with a useless flag.

Fights should take place near a tower, on the hill. Fighting outside the cap radius of a tower does not advance the control meter and does not stop the graveyard from spawning enemies.

If one side has three towers, and the other side only has one tower, it is most likely that the side with three towers will win, even if the other side captures all the flags from start to finish. The reason for this style of play is that flag capping gives points depending on the number of towers the same side controls. If you have more towers, flag caps are worth more. If you have fewer they give fewer points. At the current mechanics, no number of flag runs can win the game for the side which only controls one tower from start to finish.

The best strategy is to capture three towers right at the start. Groups 1 and 2 will head to one of the opponent's towers while one person from Group 1 or 2 will cap the same tower on their side. Group 3 will head to the other tower on your side and cap it, staying there to defend. The flag is left alone. No-one should go for the flag, although there is an option to get a druid to head for the flag, in case the opponent is following the same course of action.

If you are Alliance, the forces will look something like this

If you are Horde, it will look something like this

Some do not agree with the Flag-Fighting Strategy. Assuming 100% flawless execution of the strategy, all these have to occur.

This strategy requires you to maintain control of the midfield while ensuring a proper tower defense, as well as flag-running consistently. While this strategy is quite common in PUGs, it is very difficult to utilize properly, as it requires a large amount of teamwork, and there are many counter-strategies an organized team can use. Speculation for the use of this strategy is an attempt to accrue honor via Honorable Kills.

Pro Tower Control If your side controls only one tower, regaining control of a second tower should be the highest priority. If the other side controls three towers it is virtually impossible to win no matter how many times you capture the flag. To see this, consider the case where your faction controls one tower and the other faction controls three. The other faction is gaining four points more per second than your faction (5 vs 1). Each flag capture for your faction is worth 75 points (in this scenario). You would have to capture the flag every 18.75 seconds to negate the 4 point per second difference. Even if you manage to cap every 18.75 secs you are only keeping pace with the opposing faction. A faction which controls only one tower for most of the battle cannot win.

Capturing the flag in a 1 versus 3 situation still gives you points. However, holding the flag will prevent the opposing faction from earning an even greater point advantage. So it is reasonable to have a few people trying to capture flags—after all, if you have the flag then they can't get 100 points for it.

While a team holding three towers is in a better position to four-cap (take control of all the bases), they may find trouble with the opposing faction pushing in force on their third tower with only one or two people from that faction running the flag. This can ultimately make or break the game depending on how strong the defense of that tower is.

Anti Tower Control Any strategy involving the capture of three towers is extremely risky due to defenses being spread too thin. The only time it should ever be attempted is when you significantly outnumber your opponents, or you're running a premade with flawless coordination.

Capturing two towers, playing defense, and above all, controlling the flag spawn leads to a virtually guaranteed victory as long as everyone is on board.

Comparative View Any strategy is regarded as a good strategy if it works. Teams who try for three towers and can't get them for several minutes should switch to two towers plus flag-running, before they fall too far behind. Teams who can't gain control of the middle should try for a third tower to lessen the value of the other team's flag-running.

With either strategy, the team has to control three points: either three towers or two towers plus the middle (and flag routes). The three points that need to be controlled are closer together in the two tower strategy, assuming the original towers are held, since the triangle formed by the three points is smaller and the graveyard will be closer if one is lost.

Players who are unaware of the values of flag caps at various numbers of towers often refuse to capture until a second or third tower is gained, believing incorrectly that the difference is very large (it is very large only when a fourth tower is gained). Such arguments sacrifice points if the team controls the middle.