Eye of the Storm (quest)

This article is about Stormsong Valley quest. For the battleground, see Eye of the Storm. For the Vashj'ir intro quest, see 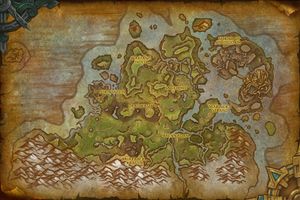 If Lord Stormsong wasn't aware of you yet, he is now. Your best shot is to reach him at the Shrine of the Storm before more of his followers fall back to his defense.

I can get you in, but you'll have to protect me. I'm in no shape to take down any more of these fiends.

And try to keep a low profile. The closer we get to the Shrine, the more power Lord Stormsong has at his disposal.

This is the only way into the Shrine of the Storm.

of two Veiled Cutthroat and a Drowned Harbinger:

of four Raging Storms. Defeat them:

defeat Sister Paxton, some Drowned Hierarchs, and some Abyssal Spawns: