Eye of the Vortex 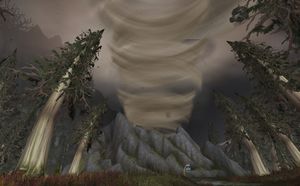 The Eye of the Vortex.

The Eye of The Vortex is the epicenter of the massive storm threatening to tear apart Darkshore. It lies very near Ameth'Aran. The land has twisted up into a hill, the top of which holds a massive vortex which can be seen across the zone. Twilight's Hammer agents fly near the top of the vortex, keeping the storm from dissipating. Malfurion Stormrage is attempting to stabilize it so that it doesn't destroy the region. With the help of Elder Brownpaw, Selenn, Aroom, and Thessera, the Twilight's Hammer helping the storm are stopped.

The tornado was gone by the time of the War of the Thorns.

During the Battle for Darkshore, the area was taken by the Twilight's Hammer.