The term faction is also used to refer specifically to the two playable factions in World of Warcraft: the Alliance and the Horde. Each playable race (except pandaren) is specifically aligned with one faction or the other, and all player characters of that race automatically belong to that faction. Pandaren characters are the exception and must choose a faction to leave the Wandering Isle, at around level 10. Once chosen, a character's faction cannot be changed through in-game means. However, there is a paid Faction Change service available that can perform this function. For all races except pandaren, using this service requires also changing your character to a new race, one that is aligned with the character's new faction. 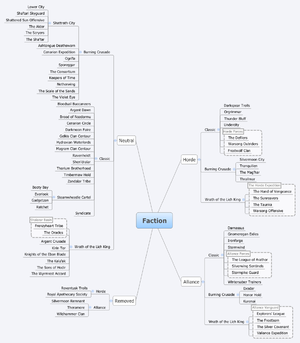