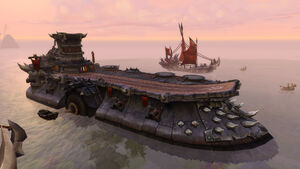 A Horde carrier in Nazmir.

High Warlord Cromush recalls the Horde champion to the carrier to meet with Pozzik, who rides Pozzik's Experimental Bomber with the champion to The Sundered Span so they can obliterate the Alliance army.

While fighting in the skies, the Horde champion might meet Baron Cloudsnipe, whether he survived or not is unknown.

When the Alliance army has been obliterated, the champion lands on The Stormy Pearl and while Pozzik repairs Pozzik's Experimental Bomber the champion kills the sailors and Captain Beamwind, the captain of the ship. After the captain dies and Pozzik repairs the bomber, Pozzik, and the champion fly away from the ship while Pozzik hopes the take-off leaves scorch marks. While flying back to the carrier Pozzik proclaims that fighting in a war is quite fun and that the Horde can count on him next time they need something fast and deadly built.