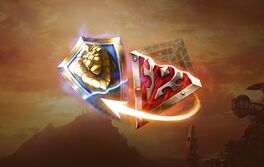 The Faction Change service is a paid service offered by Blizzard that allows players to change the faction (Alliance or Horde) of a character. This service is being offered in response to player requests. This service has been designed carefully to avoid disruption of the current gameplay on the realm, so certain restrictions will apply. The current cost is 30 USD, 25 Euros or 20 GBP per character to switch. The change is permanent, however, after a cooldown period, you can purchase an additional change to go back to the player's original faction.

[100 - 110] In the Blink of an Eye on at least one character, you can skip to the beginning of Legion on your new faction by talking to Recruiter Lee in Stormwind or Holgar Stormaxe in Orgrimmar.

When a character changes factions, their home city reputation level translates into the same level as the home city of their new opposite faction race. For example, a Gnome turning into a Blood Elf would see his Gnomeregan reputation become his new Silvermoon City reputation.

Reputations with the remaining home cities will then convert to their opposite-faction counterparts according to the default pairs.

† Some reputations do not have an opposite-faction equivalent, and thus will not be included in a faction change. However, they will be restored at their previous levels if the character ever transfers back to their original faction.

When a character changes factions, the mounts associated their original race automatically convert into those of their new opposite faction race. For example, a Troll turning into a Night Elf would see his Raptors turn into Nightsabers.

The mounts associated with the remaining home cities will then convert to those of their opposite-faction counterparts according to the default pairs.

*If you own one of the discontinued epic mounts (Ivory Raptor, Ancient Frostsaber, etc) and you transfer to a race without discontinued mounts, you will be given a random discontinued mount from another race on your new faction.
** Some races have three varieties of the normal-speed mounts (require 75 riding skill), while others have four. During a faction change, you may receive a random normal-speed mount of a race in your new faction to accommodate this disparity. Your total number of mounts will be unaffected by a faction change.

The following mounts will always convert to a default opposite-faction counterpart.

Faction-specific achievements include several in the Player-vs-Player category (such as those to defeat the racial leaders and enemy players in their capital cities), and are included in certain world events like Midsummer Fire Festival and Hallow's End. The majority of these achievements follow a 1-to-1 conversion to an opposite-faction equivalent.

The achievements relating to the Argent Tournament, including becoming a champion for each home city, will not translate in a faction change.

Some items will automatically convert into the corresponding items of the opposite faction. These items include Insignias of the Alliance/Horde, and PvP weapons and armor such as the

[Grand Marshal's Claymore] (which will turn into the

If an item has an opposite-faction counterpart, that information will be displayed on those items' information page as displayed by the Armory.

Items that do not have an opposite-faction equivalent, such as faction-specific quest starting items, will be turned in to Solid Gold Coins.

Is this service taxed? If so, how can I tell if my purchase will be taxed?
Players in select states in the U.S. may be subject to taxation when using our Faction Change service. This list includes, but is not limited to:

At what level can I change a character's faction?
Characters level 10 and above are eligible for a Faction Change.

Will PvP realm restrictions prevent me from changing a character's faction?
No. PvP realms no longer possess any faction-based restrictions. You may now play Horde and Alliance characters on any realm you wish.

Will this service allow me to customize a character and select a different name once its faction has been changed?
Yes. Each Faction Change purchase will also provide the target character with an included re-customization and optional name change.

Does that mean I can use this service to change the character back to its original faction?
Absolutely; however, this will require purchasing another Faction Change.

When I change a character back to its original faction, can I select any new race?
Yes. As noted previously, though, you will only be able to select a race that is available to the character's class.

Will I be able to select Cataclysm races and class combinations for a character once they're available in game?
Details are not available at this time. As development continues, though, we hope to provide more information.

What happens after I initiate a Faction Change?

Once your payment has processed and after you have remained logged out of the game for at least 30 minutes, you will see a new button to the left of the character's name upon next login. Clicking on this button will allow you to select the character's new faction and race, as well as customize the character's look and name. These steps will greatly resemble the character creation process.

**Please note that neither enchants nor socketed gems will be affected by an exchange.**

Will the rest of the inventory (materials, alternate currency, etc) be affected in any way?
As with equipment, items which are not considered faction-specific will remain unchanged by this process. Faction-specific items will be exchanged for a cross-faction equivalent.

What will happen to the character's mounts when I change its faction?
Mounts which are not considered faction-specific will remain unchanged by this process. Faction-specific mounts will be exchanged for a cross-faction equivalent.

What will happen to the character's titles when I change its faction?
Titles which are not considered faction-specific will remain unchanged by this process. Faction-specific titles will be exchanged for a cross-faction equivalent.

Faction neutral reputations will not be affected by this process, and faction-specific reputations which do not possess an equivalent will be lost.

What will happen to the character's quests when I change its faction?
Quests which are active in the character's log at the time of the Faction Change will be cleared and all quest items associated with these quests will be destroyed.

What will happen to the character's flight paths when I change its faction?
All flight points associated with the character will be reset and you will receive a new list of flight points which are appropriate for the level and new faction.

What will happen to the character's honor and Arena points?
Any honor points, Marks of Honor, and lifetime honorable kills will not be affected by this process. Earned Arena points will carry over, as well; however, any pending Arena points accrued after the last maintenance period, but before your Faction Change is initiated, may be lost.

Is there a gold limit for Faction Changes?
Yes. Characters possessing too much gold for their designated level bracket will not be eligible for a Faction Change. Please use the following table as reference.

Will this service share a cooldown with the Character Transfer, Character Name Change, or Character Re-Customization services?
No. The Faction Change service will not share its cooldown with any of these services.

Can I use this service to change race on my existing faction?
No. We will be releasing a Race Change service in the near future for this purpose.

Will this service share a cooldown with the Race Change service?
Yes.

All achievements and quest lines related to the Argent Tournament and Shadow Vault are reset after using the Faction Change service.

Additionally, due to the manner in which Argent Tournament character information is saved, reputations with Sunreavers and Silver Covenant are reset (0/3000 in Neutral) during a faction change and do not translate.