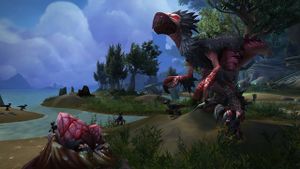 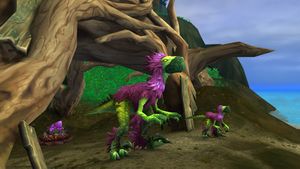 Falcosaurs are an invasive and predatory dinosaur species that have recently arrived on the coastlines of the Broken Isles and are breeding out of control.[1] Marin Bladewing hates them.

In patch 7.1, players are able to collect the eggs and feathers of the falcosaurs to use as reagents for new First Aid and Cooking recipes. Players are also able to rescue an orphaned falcosaur pet to begin a journey toward understanding these hungry creatures, and "may just earn a new mount along the way".[1]

Falcosaurs are immune to the corruption and infusion of fel.[2]

The primal need to hunt occurs in falcosaurs at a young age.[3] And while falcosaurs are predatory, they are actually omnivores and eat fruits as well as berries in large quantities.[4][5] Said berries are actually what give the Bloodgazer falcosaurs their distinctive, blood red eye color.[5]

If a falcosaur has been away from their origin of birth for too long, they may become depressed and lethargic and will possibly cease to eat and drink.[6][7][8][9] They also have no issue with consuming dairy products such as cheese.[10]

The species encountered on the Broken Isles are as follows:

While the colors they sport make them look fierce and intimidating, the bloodgazer falcosaurs are predisposed to eating fruit and berries.[5][11]

Direbeak falcosaurs are the heartiest of the bunch. Their sense of smell, however, is not as good as that of other falcosaur species, which had led them to prefer pungent meals (of which diary products are an example) and are often found feasting on carrion that has been in the sun for days.[10]

Their shimmering hides have adapted to confuse and disorient prey.[12]

The sharptalon falcosaurs have a diet which subsists mainly on small nuts and berries, their claws are used mostly for defense.[13]

Snowfeather falcosaur are the most predatory of all known falcosaur species while being particularly fond of large prey.[15]

Their hide and fur allow them to hide in fog and fog banks.[16]

These mounts involve the process of the companions growing up alongside the hero.