Faldir's Cove is a small natural harbor on the southern shores of Arathi Highlands, near Stromgarde Keep and the Drowned Reef. 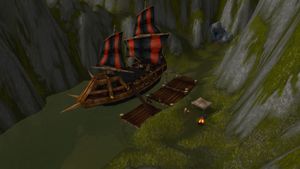 The Harbinger harbored at Faldir's Cove.

An expedition of Blackwater Raiders, led by Captain Steelgut and Captain O'Breen, was sent to this region in search of an elven treasure. A device made by two gnomish engineers, Doctor Draxlegauge and Professor Phizzlethorpe, detected elven gems calcified within the stones of the Drowned Reef.

Unfortunately, due to a mysterious tide caused by the naga guarding the sunken ruins, two of the three ships sank. The third ship, the Harbinger, landed safely on the shore; however its crew was trapped in the bay until some adventurers agreed to fight the naga and retrieve the navigation logs from the sunken ships.

The mountain near the Cove was excavated to make it easier to locate, also making a well marked path carved into the hills just east of Stromgarde Keep.

At some point the Blackwater Raiders left the cove, and after conflict erupted between the Alliance and the Horde at Stromgarde Keep and Ar'gorok, Faldir's Cove was taken by the Alliance. It remains in their control, even if Stromgarde is lost. 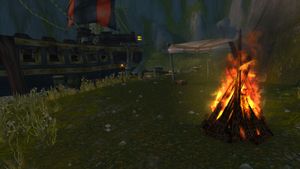 The camp before Battle for Azeroth.

Several quests are available from the NPCs in Faldir's Cove for both factions that give Booty Bay reputation and decrease your reputation with Bloodsail Buccaneers.

A hidden port behind Stromgarde in the Arathi coast still exists, accessible through a series of hidden caves. It used to allow for secure trade between the north and the south. As far down as Booty Bay, in fact.[1]

The cove is most likely named after Faldir, and is likely the place where he and his followers began their voyage across the sea to create the kingdom of Stormwind.