This item drops from Majordomo Staghelm in the Firelands. 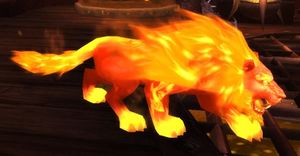 Once the druid has activated the fire cat appearance, they can switch to another weapon. The fiery appearance for cat form will be lost once combat ends, though.