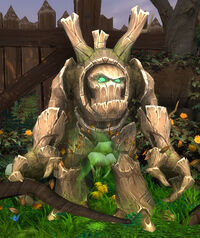 Fangraal as the Lifeless Protector

Fangraal is a Draenor ancient who assists the Alliance in battle in Ashran.

First encountered as a Lifeless Protector, Fangraal must be empowered by gathering 3,000 Artifact Fragments for Anenga in Stormshield Stronghold. Once empowered, he will push toward the Horde base, attacking any hostile characters he encounters.

On Fangraal's death
Anenga yells: Fangraal has been slain by the Horde! Poor lil' guy.

For tips on Fangraal's role in the battle of Ashran, see Ashran.