From Wowpedia
(Redirected from Far seeing)
Jump to: navigation, search

For lore about clerics, see Cleric.

Clerics are the holy men of our kingdom. Their spiritual leadership keeps both the people and the troops of Azeroth focused upon our mission of everlasting peace. Their ability to channel the spirit of humanity through their bodies makes them truly wondrous, and stories of their ability to heal the sick and injured, as well as being able to affect the perceptions of others, are miraculous in nature. The transgressions against Humanity by the Orcs have forced them to devise ways to defend themselves, but their true path remains the healing of men's souls.[1]

The basic healers of any army, Clerics are extremely useful when fully researched. Their spell Far Seeing can make up for a scout by removing the fog of war from previously undiscovered areas, mainly to find a new Gold Mine. Their spell Healing is extremely useful, as it keeps an army at its maximum potential. Their most useful spell is Invisibility, as it creates the possibility of stealth strikes at critical points (important enemy structures), usually best done by casting invisibility on a couple of Water Elementals and sending the Water Elementals to the enemy's city.

Knowledge is the key to understanding, and it is with the hope that by having knowledge of our powers, you will understand how we may best serve the Kingdom. I pray that the words to follow will assist you in our quest of freeing Azeroth from the threat of the Orcish hordes. Concerning the abilities possessed by the clerics from the Abbey, I am most knowledgeable. The conjurers, however, have refused to divulge their secrets, and therefore my understanding of the intricacies of their magiks is not as complete. God speed in your fight.

- The Abbot of Northshire Abbey[2]

The invasion of the Orcish hordes has necessitated our divining a method to protect not only ourselves, but the whole of the people of Azeroth, as well. The use of physical violence is not the calling of our order, but each force must be met with an equal force for the balance of good and evil to be preserved. As the archangels took up swords of light to defend the heavens, so must we take up holy arms to defend our lands. The pure essence of the casters heart, mind, and soul strikes out to defend him from threat, and enters into the soul of the target. This is especially effective against the Orcs because of their dark and evil origins.[2] 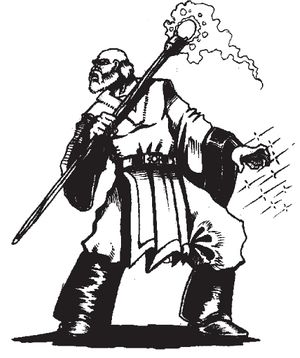 A Cleric as seen in the Warcraft: Orcs & Humans Manual.

The aiding of our brothers and sisters in times of sorrow, grief, and illness is the primary concern of the disciples from Northshire Abbey. This has required us to devise a way to ease the burdens of those about us, with out causing another an equal burden. This has led us to using the spirit of humanity itself to heal all forms of injury or disease. The effect is that the pain and injury of the one afflicted is divided amongst all humanity, making the burden easier to bear (carrying the cross of another).[2]

This is the ability to cloud the perceptions of others so that they do not recognize the physical existence of the caster. This was originally employed as a tool to make the confessing of secrets that weighed heavily upon the souls of worshippers easier to speak. The clerics of Northshire Abbey have found it very useful in assisting the armies of King Llane in ridding Azeroth of the Orcs.[2]

As dispensers of peace and understanding to the people, the need to keep a clear perspective is a vital one. This ability has developed from that need, and therefore allows the caster to see in an all encompassing fashion, as God does. His vision extends to all corners of the land, and his view is omnipotent. The power of this divination is limited, for when one strives to see the world as God does, the human mind can only partake of a meager portion before it is forever blinded by the clarity of that sight.[2]