From Wowpedia
(Redirected from Farahlon)
Jump to: navigation, search

The Netherstorm[1] is a region of northeastern Outland consisting of multiple large land fragments and shards of rock floating in the Twisting Nether. It was previously known as Farahlon[2] (or the Fields[3] or Plains[4] of Farahlon), a lush island in the Barrier Sea of beautiful forests and a verdant open range east of Gorgrond,[5] until it was broken during the sundering of Draenor.

The Netherstorm is now locked in a constant magical storm bleeding from the Twisting Nether, further deteriorating the land. Magical lightning arcs within a thick haze of violet cloud and bands of pure magical energy wrap their way across the sky. Some of its wild creatures include nether rays, mana wyrms, and colossi.

The Eye of the Storm battleground takes place in one of the floating islands suspended above the Netherstorm, not far from the Tempest Keep, where the Exodar draenei fight the Silvermoon blood elves for the control of this nexus of power.[6] 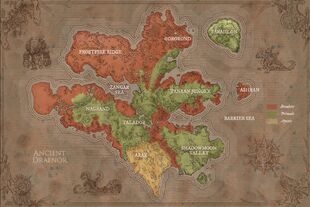 Farahlon in the northeast before the sundering of Draenor.

When the ancient Sporemound Botaan was killed by the colossals, the bulk of its corpse formed a vibrant region later called Farahlon,[7] which became a stronghold of the Primals.[8] Before the sundering of Draenor, Farahlon had a coastline on the Devouring Sea. Besides the Primals, Farahlon was also home to some giants, and the presence of Farahlon Breakers in modern Netherstorm indicates that more Breakers might have been present as well.

Farahlon was also once home to a draenei city of the same name.[9] After the destruction of Shattrath City and the defeat of the draenei, the Horde began to attack Draenor's other races. Kilrogg Deadeye led the Bleeding Hollow clan on a campaign into Farahlon, which now served as the last bastion of the Primals. Its isolated location also made it one of the few places on Draenor unaffected by fel magic. After crossing the ocean with the help of ogre shipwrights, orc warlocks leeched life from the Primals and used the stolen power to set the island's dense forests alight while Kilrogg and his army slaughtered every botani and genesaur they could find.[5]

During the Invasion of Draenor, the Kirin Tor members of the Alliance Expedition settled on Farahlon and created Kirin'Var Village.[2] When Ner'zhul's portals destroyed Draenor and transformed it into Outland, Farahlon was transformed into the Netherstorm. The Twisting Nether constantly ate away at the Netherstorm's borders, and its chaotic magics slowly bled into Outland.[1] 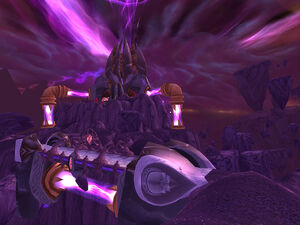 One of the manaforges in Netherstorm.

Years later, the naaru A'dal, M'uru, and O'ros arrived in the Netherstorm aboard the dimensional fortress Tempest Keep in order to aid the peoples of Outland.[1] Although the region was broken, Netherstorm was still comparable to Westfall with its fields.[10] But when the blood elves led by Kael'thas Sunstrider reached Netherstorm, they captured Tempest Keep and used its machinery to harness the storm's magic, further compromising the already unstable land.[3] They dismantled parts of Tempest Keep and strategically built five tremendous manaforges across the Netherstorm, siphoning mana from the Twisting Nether itself and storing it in mana cells for the elves to feed on.[11] The more energies they produced, the more unstable the region would become, turning Netherstorm into a barren, twisted wasteland.[citation needed]  Over time, the manaforges weakened the fabric of reality in the Netherstorm, attracting the attention of the ethereals, who arrived on Outland to ply their trade or pursue their war against the Void.[11] Thanks to adventurers however, the forges were stopped soon enough preventing the entire destruction of Outland.[citation needed]

Several areas of the region have been influenced by goblins who performed research and experiments in the unique environment. Signs of their influence can be seen on the architecture of bridges and signposts. They have erected a major base in the form of Area 52 on the southwestern island, and another smaller base in the east called Cosmowrench.

The Netherstorm is also home to two factions of ethereals, the Consortium and the Protectorate, respectively based at the Stormspire and the Protectorate Watch Post. Great magical domes constructed by the ethereals dominate the view from nearly any point in the region. Within these domes, the ethereals worked to preserve an environment that was to the liking of their flesh-based clients.[citation needed]

The Burning Legion also took a stake in the zone. They established two principal bases, Forge Base: Oblivion and Forge Base: Gehenna, and overran the Arklon and Farahlon ruins. Their representatives could also be found close to Kael'thas' blood elves, namely the manaforges spread across the region. 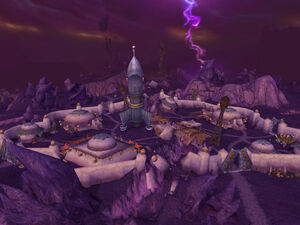 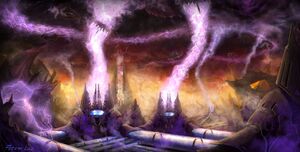 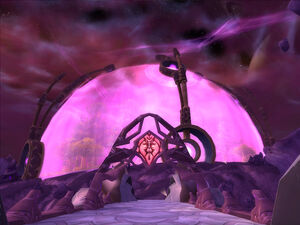 The region known as the Netherstorm is comprised of the lands situated on seven relatively large floating islands and thousands of smaller rock fragments interspersed amongst them, which are the remnants of the once-lush Fields of Farahlon. The original color of the rock is unknown, but since the deterioration of the land began, the bedrock and soil have assumed a sickly purple color that supports absolutely no plant life (barring netherbloom). As the original landmass was ripped apart and warped into its current state, great fissures opened and jagged, lopsided spires and platforms of rock were thrust upward. Like many other regions of Outland, great floating islands hover unnaturally above the landscape, some found spinning listlessly hundreds of feet above the surface.

By land, the Netherstorm can only be entered by crossing the goblin-built Gyro-Plank Bridge which spans the gap between the eastern border of the Blade's Edge Mountains and the Netherstorm's westernmost island. A short hike down the road from the bridge leads to the goblin outpost of Area 52 where the goblins under Rocket-Chief Fuselage work to perfect their nether rocket technology.

Several draenei ruins also populate the region. The Ruins of Enkaat lie to the northwest of Area 52 and are inhabited by the restless spirits of fallen draenei who once lived there. The Arklon Ruins further to the east are inhabited by demons of the Burning Legion hunting for draenei artifacts of power. In the far north of the Netherstorm lie the Ruins of Farahlon, also infested with powerful demons.

The Burning Legion has several holding in the region in addition to the draenei ruins. Forge Bases: Gehenna and Oblivion, dedicated to the construction of monstrous fel reavers see scores of demons working furiously to construct the reavers. Invasion Point: Overlord and Invasion Point: Destroyer are sites dedicated to the summoning of powerful demonic reinforcements. The Legion's commander in the region, Socrethar, has taken over the entirety of the smallest of the major islands in the northwest. The island has gained the name Socrethar's Seat as a result.

On the northeastern side of the northeast island lies the Celestial Ridge, a great forest of arcane crystals and nesting grounds for a large number of nether dragons of the Netherwing faction. On the eastern side of the southernmost island is the human settlement Kirin'Var Village. Built as a base for many of the Kirin Tor mages that came through the Dark Portal at the conclusion of the Second War, it is now inhabited only by ghosts and strange magical apparitions.

One of the most notable features of the land are the five Manaforges scattered across the floating archipelago. Constructed by the forces of Kael'thas using naaru technology discovered in Tempest Keep, these abominable devices provide a potent source of arcane power to fuel Kael's insidious plans. Of the five, four of the Manaforges (Ara, Coruu, B'naar, and Duro) are operational and garrisoned by the Sunfury blood elves and a scattering of the Legion's demons. The fifth; Manaforge Ultris, has been destroyed and infested by shadowy void creatures. Two rival ethereal bands: the Ethereum and the Protectorate, vie for the rights to the potential profits that might be reaped from such a disaster. Great tube-like conduits that span the region channel the energies amassed by the Manaforges to Kael's seat of Tempest Keep in the east.

Finally, in the central and northern regions of the Netherstorm are the holdings of the ethereals of the Consortium. There they have constructed massive arcane domes inside of which they have engineered conditions favorable to plants and animals that could never survive in the Netherstorm otherwise. Known as Eco-Domes, they serve as lush oases in the arcane desert surrounding them. The southernmost, Midrealm, is home to creatures such as lynx, moths, and crocolisks. To the immediate north is the largest in the region, consisting of three conjoined eco-domes. Eco-domes Sutheron and Skyperch flank the Stormspire to the north and south. Adopting a series of draenei ruins atop a tall cliff, the ethereals have made the Stormspire the center of all Consortium activity in the Netherstorm and indeed in all of Outland. North of the Stormspire is the smallest of the domes, Eco-Dome Farfield. It is uninhabited by ethereals but is home to several varieties of exotic dinosaurs. 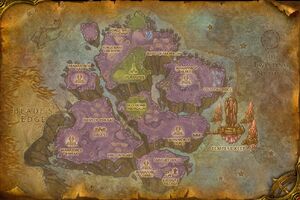 Map of the Netherstorm. 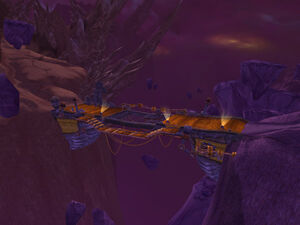 The Gyro-Plank Bridge bridging the Netherstorm and the Blade's Edge Mountains.

Concept art of Tempest Keep, the structure which houses all the dungeons in Netherstorm. 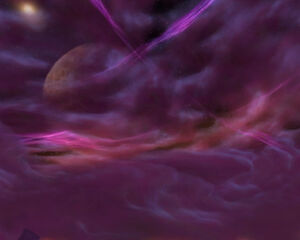 The sky of Netherstorm as seen in-game.

The Netherstorm contains several characters of note. Spymaster Thalodien and Anchorite Karja lead the Scryers and Aldor forces, respectively, against Kael'thas' blood elves and Socrethar's Burning Legion forces. Nexus-Prince Haramad is the leader of the Consortium's business ventures atop the Stormspire. 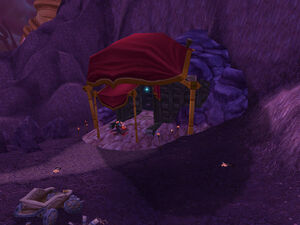 Access Shaft Zeon, a mine beneath Manaforge Ultris, holds nearly always one or more veins.