Fargo Flintlocke is a level 84 dwarf quest giver located in Stormwind City and the Twilight Highlands. He owns Flintlocke's Seaplane. Fargo also helps attack the forces of Ragnaros at Sethria's Roost in Mount Hyjal during the quest

On alternate Draenor he can be hired as an Alliance follower of Lunarfall's commander.

Right after the Battle for the Broken Shore, he may appear as a Weary-Eyed Mourner.

He later appears in Azsuna, and at Morheim in Stormheim.

But once ol' <name> here blasts through their bulkhead in a hail of splintered wood, blood, and phlegm and then starts crawlin' across the deck with both legs broken, oh aye, they'll not see THAT comin' by a sweet mile, no sir!

The Protectors of Hyjal

Those murlocs be up ta no good, oh aye. I know this 'cause I can smell somethin' fishy. 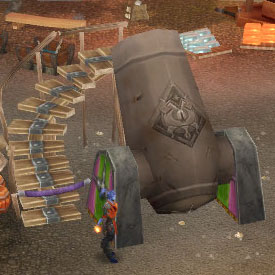