Not to be confused with Seer.
This article is about the occupation. For the Warcraft III unit, see Far Seer (Warcraft III). For the title, see Farseer (title). 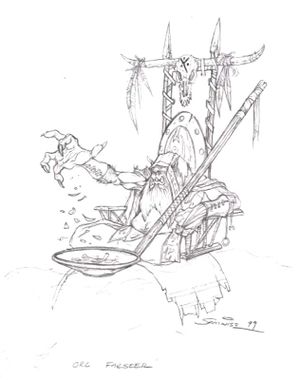 Farseers (or far seers) are exceptionally powerful and wise shaman that play the role of advisors or take on leadership positions in their communities. They are highly esteemed and respected by their factions. Though farseers were historically seen with orc shaman in great numbers, most races that practice shamanism seem to have farseers.

Dark shaman can be dark farseers.[1]

Long ago, the first Farseer of the Earthen Ring was given a vision of the elements. In the vision, she foresaw the arrival of a new Farseer, one who would lead the Ring through a time of terrible crisis and unite the elements.[2]

Ancient orc far seers represent the pinnacle of shamanistic power. These powerful shaman are counted amongst Thrall's closest advisors and are constantly in tune with the workings and maneuverings of the Horde. Far seers are not only tied to the elements of the earth and sky, but are also adept at foretelling the future. They can be granted visions of distant places and summon both the elements and spirit wolves to protect them. Far seers can summon lightning or the element of earth to induce a massive earthquake.[3]

During the Third War, the demon-worshiping Blackrock clan that lived in Alterac Mountains in Lordaeron had two farseers: Mazrigos and Throk'Feroth. They, along with the rest of the clan, were killed by the Scourge led by Arthas Menethil.

During the invasion of Outland, the Mag'har were found by the Horde coming from Azeroth. Among the Mag'har was a group of farseers called the Lightning Sons.

During the Burning Legion's third invasion, the adventurer was named Farseer of the Earthen Ring, become the leader of the organization after Thrall's departure.[4] Nobundo believed that the adventurer was the subject of the first Farseer's prophecy. The Farseer and the Earthen Ring went about restoring balance to the elements. This included visiting the elemental realms and assisting the elementals in finding a suitable leader after the deaths of Ragnaros and Al'akir.

The Far Seer is a playable hero for the orc race in Warcraft III. A mystical hero who is adept at commanding the elements, he can cast

[Earthquake]. The only playable Far Seer in the campaign for both Reign of Chaos and The Frozen Throne is Thrall. Drek'Thar is briefly played in the bonus orc campaign.

The far seers are an elite group of ancient orcs who represent the pinnacle of shamanistic power. These powerful shamans, who preside over matters mystical for the Horde, are counted amongst Thrall's closest advisors and are constantly in tune with the workings and maneuverings of the Horde. Far seers are not only tied to the elements of the earth and sky, but are also adept at foretelling the future. Their wisdom is outshined only by their courage and ferocity in combat. When the enemies of the horde advance, the far seers mount their loyal dire wolves and wade into battle wielding all the elemental powers of their shamanistic birthright.

Far seers are adept at seeing places and events that are distant in both space and time, allowing them to foretell the future to a degree. Many say that they are the pinnacle of shamanistic development. The far seer is an orc tradition, but they sometimes train members of their allied races in its ways, especially tauren. These shaman are wise and often old. Most shaman of this type do not actually earn the title "far seer" until late in their lives, but they must begin training at an early age.[6]

Far seers are some of the most respected shaman in the Horde. Most of them ride great white wolves to battle — some say this practice is in homage of the Frostwolf clan, of which Thrall was the chieftain before he united the Horde. The orc far seer is the most respected of shaman. He is not a dedicated battlefield mage; however, the guidance provided by his visionary powers can prove to be more valuable than a dozen skilled warriors. In combat, a far seer prefers to sit back and summon spirits to do his bidding, but if he's pressed into melee, he can be a formidable adversary.[7]

In addition to being the warchief, Thrall is also an accomplished and practicing far seer.[citation needed]  He was trained by the ancient far seer Drek'Thar. 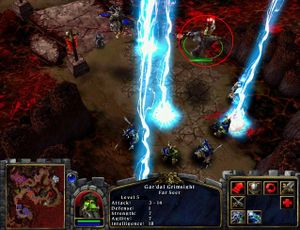 Far Seer flying on a wyvern in the Warcraft III Alpha