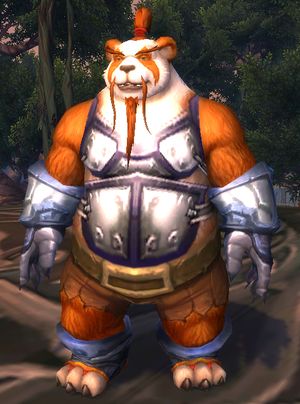 You have been matched with a... special trainee. His name is Fat Long-Fat.

Fat Long-Fat... operates outside of the normal rules of combat. He does not fight every day, and when he does, he chooses his competitor. Today, for some reason... he has selected you.

You will find him atop Angkhal Pavilion.

(Fat Long-Fat: "Long-Fat is his name. Fat just describes him.")

We haven't received a request from Long-Fat in some time.

Of course you won. Fat Long-Fat does not fight to win. He fights for... other reasons.

I fear I've spoken too much about this subject already. From now on... no more questions about Fat Long-Fat.

When Thelonius said "atop Angkhal Pavilion", he meant it literally. Fly up top and speak with him:

Let's fight!
Fat Long-Fat says: I apologize in advance for the beating you are about to suffer.

Fat Long-Fat is a level 90 pandaren with 787,000 health and the following abilities:

The hard part of the fight for those who like to kite is the small size of the area. Don't fall off the platform or he will evade and reset!

Some time after turning in, Fat Long-Fat sends a letter to the adventurer via the in-game mail system:

You are strong. This is good.

Later (not same day) you will also receive an email from Fat Long-Fat in your in-box asking "Why do you fight?"