For the mob, see Fathom Ray. 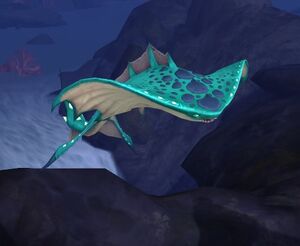 Fathom rays, bloatrays, sky rays, or waverays are large flying rays native to Nazjatar. Gasses naturally stored within the creatures allow them to survive within the depths, and those same gasses also allow them to effortlessly float through the air.[1] These gasses originate from local corals that are part of the diet of the rays.[2] The naga raise bloatrays in captivity, harvesting their gas organs to craft alchemy which allows them to breathe air more easily.[3] Both the ankoans and the Unshackled use waverays as mounts.[4][5]

Fathom rays are tamable by hunters as part of the ray family.

Fathom rays bear some slight resemblance to couatl and may thus be intended to be the same type of creature.