For the in-game item, see 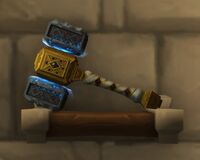 Fearbreaker is an ancestral hammer of the Bronzebeard clan.[1] The Light seems to flow through its wielder from the weapon.[2] The mace was given to then-Prince Anduin Wrynn of Stormwind by King Magni Bronzebeard of Ironforge during the prince's visit to that city shortly before the Cataclysm. Anduin eventually gave the weapon as a gift to Baine Bloodhoof to assist him in reclaiming Thunder Bluff from Magatha Grimtotem, but Baine returned the hammer before the fall of Theramore as he did not feel worthy to wield it. Fearbreaker remained in Anduin's possession for several years until Magni reclaimed it to combat the return of the Old God N'Zoth.

Gleaming as bright as the day it was made although it was quite old. The head was silver, wrapped in intersecting bands of gold that had runes etched into it. Small gems dotted it here and there. It was altogether a thing of beauty and power.[2] 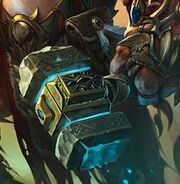 Fearbreaker was a family heirloom of the Bronzebeard clan and had been passed down in Magni's family for many hundreds of years. It had been used in both Azeroth and in Outland.

During Prince Anduin Wrynn's visit to the dwarven capital of Ironforge, King Magni Bronzebeard gave Fearbreaker to him and explained a little of its history. As Magni related it to Anduin, "it's known the taste o' blood and in certain hands has been known to also stanch blood", which implies that the weapon is imbued with healing powers. Indeed, when Anduin (and later Baine) took up the weapon, the Light seemed to flow through them from the weapon, showing that the weapon "liked" them.

When Moira Thaurissan held the city hostage with her Dark Iron forces, Anduin hid the weapon, believing Moira would not appreciate that he had been given a family heirloom. When he later escaped by hearthstone to Theramore Isle, he took the weapon with him, and while meeting Baine, was inspired to give it to the tauren to assist him in reclaiming Thunder Bluff from Magatha Grimtotem, after checking that the mace would accept him as it had Anduin. Baine subsequently wielded the hammer during the battle for Thunder Bluff and personally struck Magatha with it, forcing her to yield.[2]

Baine wielded the mace when he was attacking quilboars and rescuing Garrosh Hellscream. It shone brightly like the Light.[3]

Some time after Deathwing was killed, the Horde led an attack on Northwatch Hold and from there planned on destroy Theramore Isle. Baine sent Perith Stormhoof to warn Jaina Proudmoore in advance, and also had Perith deliver Fearbreaker with the request that Anduin took it back, as Baine did not feel he was worthy enough of holding the weapon.

When Jaina returned to the ruined Theramore for the last time, she found the mace, undamaged. She took it with her when she left,[4] and would later give it back to Anduin.

During the trial of Garrosh Hellscream, Anduin was seen with the mace at the Violet Rise in the Isle of Thunder, where the Wrynns stayed for the duration of the trial.[5]

When Garrosh Hellscream escaped, a King Anduin Wrynn from an alternate timeline appeared in the Temple of the White Tiger, clutching Fearbreaker in his hands. The Prince Anduin took the glowing mace when the king was overwhelmed and began fighting a hunter Vol'jin from another timeline. Enraged, Vol'jin threw his glaive at the prince but he quickly drew the mace, knocking the tossed weapon aside. After the king died, the prince took the weapon and continued fighting and defending himself.[6] What happened with the alternate weapon is unclear, but it is likely that it was returned to King Anduin's timeline. 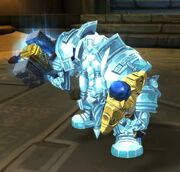 Magni wielding Fearbreaker at the Halls of Origination.

The recently appointed King Anduin had the mace by his side during the ceremony at Lion's Rest in Stormwind City after the Argus Campaign.[7] When not in use, Anduin's manservant—Wyll Benton—would mount Fearbreaker on a hook on Anduin's bedroom wall so that the king could easily access it just in case.[8]

At the end of the Fourth War, Speaker Magni asked Anduin if he could get his weapon back, as its power would be needed in the days to come upon the return of the Old God N'Zoth. Anduin guided the dwarf to the weapon and returned it to his old friend. Anduin confessed relief that Magni was taking the weapon back, reiterating how he and Baine didn't feel worthy of it. Although Magni stated he wouldn't have bestowed it to Anduin in the first place if he wasn't, Anduin believed it belonged in the hands of a mountain king.[9]

In War Crimes, it was not clearly stated if the Fearbreaker seen in King Anduin's hands was from his alternate timeline or from the main timeline. If the latter, the weapon shouldn't have been in the temple as weapons were forbidden during the trial and the combatants were given weapons by the pandaren when the chaos erupted. When King Anduin died and returned to his own timeline, the weapon did not vanish with him but was instead taken up by Prince Anduin. However, it's possible that it vanished back to its own timeline at a later point.