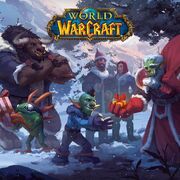 The Feast of Winter Veil, also called the feast of Great-Winter, or simply Winter Veil[1][2] or Winter's Veil,[3] is an in-game, end-of-year, several week long holiday event seeming to be the in-game counterpart of Christmas and other holidays at the end of the year.

From the World of Warcraft calendar:

Greatfather Winter is visiting the cities of Ironforge and Orgrimmar, courtesy of Smokywood Pastures. And throughout Azeroth, it is the season to be jolly!

During the Feast of Winter Veil, many special decorations appear in capital cities.

Info from the official site

'Twas the feast of Great-Winter
And all through the land
All the races were running
With snowballs in hand.

The cooks were all frantic
And for those "in the know"
Swoops and owls were crashing
Like new-fallen snow.

Cookies and eggnog
Were consumed by all
As the snowballs flew freely
And drunks smashed into walls.

May your feast of Great-Winter
Be one merry and bright
And from all here at Blizzard
We wish you a fun night!

The Feast of Winter Veil is upon us, and Greatfather Winter is busy spreading holiday cheer in major cities across the land! Here are a few holiday treats players can now experience in-game: 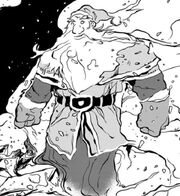 Greatfather Winter is said to bring snow across the land.

The later seasons of Azeroth are marked as a time of change in many cultures. The dwarves and the tauren especially look to the legend of the coming Winter Veil - the blanketing of the land in snow, thus heralding a time of renewal - as a time for celebration. Though the understanding of the legends that the races of Azeroth share are not dissimilar, the ways they choose to acknowledge them are as diverse as the races themselves. The term "Winter Veil" is said to stem from a supernatural being referred in many cultures to as Greatfather Winter. As he would walk the land late in the seasons, winter itself would be his billowing cloak. In his wake was the blanketing of the land in snow, and thus it is said that Greatfater Winter would cast his wintry veil over the land. Though parts of Azeroth may lie in snow, it gives the land time for rebirth and renewal.[5]

Ever consumed with the research of their origins, the dwarves choose to celebrate the season as a recognition of Greatfather Winter himself. They consider him to be the personification of one of the ancients of Azeroth - the Titans. Much as they claim lineage in one degree or another to these mystical beings, they consider their snowy home of Dun Morogh as the prime example of Greatfather Winter's blessings.[5] The holiday was introduced to the Alliance at large by Muradin Bronzebeard.[6]

The tauren and their shamanistic understanding of winter, along with their recent emergence into druidic endeavors, fit in well with the legend of Winter Veil. They focus almost entirely on the renewing aspects of the lore, however, leaving legend worship to those races (as they view it) less in tune with the nature of things. Many tauren choose this time as the right time to give thanks for the blessings of their new home in Mulgore.[5]

Near the end of the Feast of Winter Veil (December 25 through January 2), various gifts are available underneath the trees near Greatfather Winter in Ironforge, and Great-father Winter in Orgrimmar.

While some of the gifts are available to all, you must be at least a certain level to receive others.

There are several special items and plans that are only available during the Feast of Winter Veil.

Thirty-two toys are available, most of which are exclusive to Winter Veil:

One toy can be purchased for five

[Merry Supplies] at the Garrison:

This year's toys are:

Previous-year gifts are only found in the

Note that there are two versions of

[The Pigskin] listed. Both can be acquired and added to the Toy Box, as they have different item IDs. One version was the 2012-gift (and awarded the Feat of Strength

[They're Both Footballs?]), while the other version is sold by toy vendors for 40

, but acquiring the vendor-sold items will not award the feat. The achievement-criteria item can rarely be found in the

One pet spawns as a battle pet in the Giant Snow Globes:

Three pets are only found in the

One of four pets is found in the

One pet is rarely found in Snow Mounds in the quest area of Frostfire Ridge:

Sent in a letter from Greatfather Winter, players with Cooking, Leatherworking, or Tailoring skills will receive:

[Ticking Present] (from December 25 to January 2) or the

During the Feast of Winter Veil, some bosses now have a festive holiday hat equipped with a chance of dropping that hat. An extension to this, the winter hats also have an extremely low chance to drop from any humanoid.

There are three sets of quests available during Winter Veil. First, a quick intro to the holiday itself and a short fetch quest:

Another quest series reveals some of the history of Winter Veil, and awards some reputation with the home city.

The last set introduces the daily boss up in Alterac Mountains, The Abominable Greench: 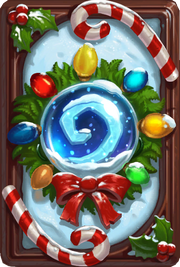 A card back themed after Winter Veil in Hearthstone.