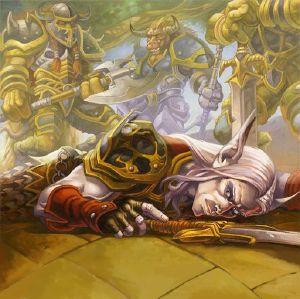 Hunters blur the line between life and death.[1]

Feign Death is a level 28 hunter ability. Upon using this ability the hunter will fall to the ground as though they had died. This effect clears the hunter's threat and can be used to end combat causing enemies to either reset or attack a different target. Enemies have a chance, based on the difference between their level and the hunter's level, to resist this effect.

And so on (+11% for each additional level). Basically this means that against higher level mobs, feign death was more likely to fail in the past. If there is a high level mob when you feign death, there is a better chance that the feign death will be resisted.

During controlled testing these tables were confirmed to be correct. This isn’t to say that other feign death bugs may be occurring, but as for the actual resist formulas, you now have them to compare to. If anyone finds data that is off from these tables when testing, please let us know the location, level, mobs, players, etc so that we can reproduce the issue and research it. Remember though that higher fire/frost/etc resistances can allow mobs/players to resist more.