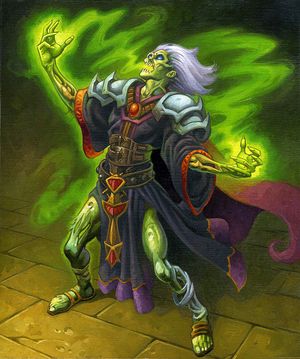 A warlock who has used (or is using)

[Life Tap], which takes a small sacrifice of the warlock's life and turns it into power.

“Wielding fel magic is like fixing a machine - you have to break a few things to get it to work.”

Fel magic is a destructive form of magic often used by demons and the members of the Burning Legion. It is demonic, entropic, chaotic and extremely volatile. Its use by the wielder, or its effects on the victim, frequently results in an alteration of the individual, colloquially called corruption. All of the Burning Legion carry the taint of fel magic within their very blood, allowing them to spread greater evil.[1] While fel is the language of chaos and disorder, arcane represents order,[2][3] and are considered opposite ends of the same spectrum.

“Sacrificial magic was considered the greatest violation of life and we were attuned to instantly punish those who delved into such... delicious sorcery.”

— A Doomguard during Seeking the Soulstones

Order is most commonly perceived in reality as arcane magic. Arcane energy is innately volatile, and wielding it requires intense precision and concentration. Disorder, on the other hand, manifests as highly destructive fel magic, a destructive and extremely addictive energy originating as a result of the mutual destruction of Light and Void as they collide on a cosmic scale in the Twisting Nether.[4] Fel is fueled by drawing life from living beings and consuming their souls, utterly destroying them in the process.[4] It requires but an insignificant sacrifice—a living fish or two, a few strands of seaweed—to fuel the magic.[5]

When a soul is devoured by fel energies, it produces more fel and is utterly destroyed in the process.[6] Lesser warlocks must use a soul shard (or soul fragment) to summon minor demons. Soul shards can be used to power spells, or to create a connection to the Twisting Nether, pulling a demon through against its will.[7]

Fel energy counters and is countered by arcane energy, its polar opposite.[8] Fel works like radiation, permeating an area and seeping into anything in the vicinity. Anything near a source of fel energy will eventually show signs of slight corruption.[9] It smells like sulfur and brimstone.[10] Fel can also pool into a green goop when it's in physical form.[11] Pit lord blood is literal fel goo. When drank, their blood causes mutations such as the growth of spikes, horns, scales, and wings. Felfire is flame born of fel magic.[12][13] It is deadly to the touch,[14] burns much hotter than normal fire,[15] and cannot be put out by regular means,[16] though the water of enchanted water elementals seems to be able to do the trick.[17] A scalding core of fel fire is what powers the fel reavers of the Legion.[18]

Fel, like all other types of magic, can be animated.[19] An example of this are the Flames of Azzinoth. Fel is mainly used to cause massive destruction by its wielders.[20] But it can also be used to turn oneself invisible,[21] to scry,[22] and to create portals much more efficient, long-lasting and easier to create than with arcane magic.[20] It can be used to give momentum and propel a boat[21] for example, and is used to power the monstrous machines of the Burning Legion.[23] Fel can also be used to heal, though it leaves a mark on creatures who are not fel-based.[24] It can also be used to breathe life into constructs such as infernals, or in a necromantic way by resurrecting demons as undead.[25][26] 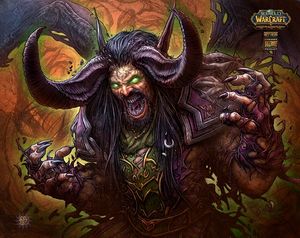 A warlock transforming because of fel energy. 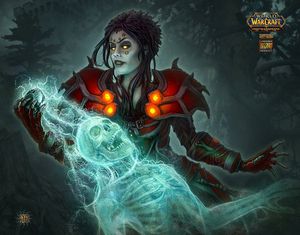 Infusion with fel magic, also called fel corruption, can manifest with positive effects in which case it can be considered a gift, or a blessing, like that of the eredar, or with negative ones in which case it can be considered a curse. Physical transformation normally ensues, such as a change to an individual's eyes or skin color, or heavy genetic mutations such as the growth of demonic traits like spikes, scales, and horns.[28] Negative corruption tends to lead to physical or mental deterioration, as happened with the draenei that turned into Broken and Lost Ones, or as happened with boars turned into enraged hellboars.

Either way, corruption gives the individual increased strength, more magical potential, and can lead to transformation into a demon. Warlocks with long exposure to or with extensive use of fel magic age faster than normal, and become physically weaker over time. Fel seems to tend to cloud one's judgment, or at least heavily amplify their negative traits such as violence and impatience while snuffing out positive ones such as empathy, allowing one to make decisions they never would've made before.

As the existence of non-sentient demons suggests, a creature's wishes are irrelevant to the process. Willing or not, a creature can be changed into a demon.[29] 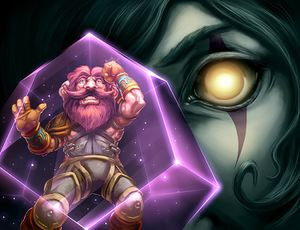 A warlock holding a Soul Shard.

...fel energies: the dark magic of demons, all corrupting and all-consuming if the craving for it was not held in check.[30]

Demon souls are tethered to the Twisting Nether and as such, even if a demon dies in the physical universe, their spirit will return to the Nether where they will reform once again. To truly destroy a demon, the creature must be killed in the Nether itself, in places where it bleeds into mortal worlds, or in areas saturated with fel energies.[31] Demons normally delight in inflicting suffering, spreading corruption and destroying all that is good. Mortal beings can be turned into demons themselves by being infused with fel energy,[29] the dark and corrupting essence wielded by the Burning Legion. 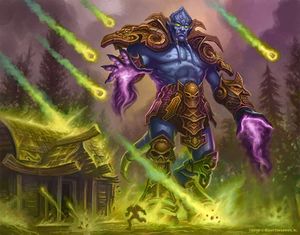 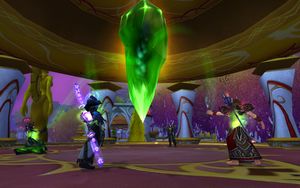 A group of blood elves in Sunwell Plateau, draining demonic energy from a fel crystal.

Titans are naturally vulnerable to fel magic. When Sargeras was infused and deformed by the explosion of fel energy caused by the shattering of Mardum, the Pantheon could not overcome Sargeras's fel-fueled might. The fallen titan decimated the Pantheon members by summoning a massive fel storm that would consume their bodies and souls alike, though Norgannon managed to save their souls and made them flee towards Azeroth, where they would vanish.[39]

Void revenants are a race of parasitic void-beings that tear holes through the planes of reality, consuming and absorbing the energies and beings within. Xhul'horac was twisted and fed overwhelming fel energy by alternate Gul'dan and wanted to use his powers to tear open the portals through which he planned to rally the forces of the Burning Legion.[40]

Demon hunters, disciples of Illidan Stormrage, uphold a dark legacy, one that frightens their allies and enemies alike. The Illidari embrace fel and chaotic magics—energies that have long threatened the world of Azeroth—believing them necessary to challenge the Burning Legion. Wielding the powers of demons they've slain, they develop demonic features that incite revulsion and dread in fellow elves.[41] Demon hunters mark their bodies with arcane runes to keep their fel forces in check.[42]

Some druids have manipulated fel energy to enhance their attunement with the wild.[43]

“It is days like this I miss using fel magic. Sure, it was evil, but it got the job done.”

Some mages gave up the arcane to begin a personal quest to understand demons and their fel energies, like Daio the Decrepit, effectively becoming warlocks. Some warlocks are also named fel magus such as Fel Magus Verondis and Fel Magus Kel'rothek.

Dalaran attempts to stifle the studies of fel magics and necromancy. Despite the superior power of fel magic which threatened to overshadow established practices, students were taught about practicality over what is achievable. Fel's efficiency is commonly balked for being unstable and "evil".[20] The official teachings of the Kirin Tor are that demonology is to be eschewed, avoided, and abjured. Any attempt to summon demons are to be found out and stopped at once, and those involved are to be expelled, or worse.[44] 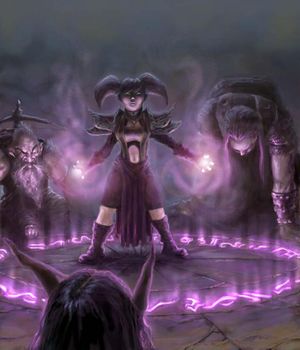 “The warlock's way was quicker, more effective, or so it seemed. But there comes a time when a price must be paid, and sometimes, it is dear indeed.”

Warlocks are magical practitioners that seek to understand darker, fel-based magic, and its destructive spells. While many warlocks willingly follow the Burning Legion, there are those who work against it, using their magic to fight against evil. Warlocks have proven themselves to be powerful allies-as well as powerful foes.[1] Warlocks convert life into fel, draining the victim as a source of power.

Fel energy can manifest as entropic horrors, pure fel magic given form to lash out at all life. The essence they drop is poisonous[45] and would poison living beings with a sickness that drains life.

Any creature can be corrupted with fel magic, including dragons, harpies, tauren, murlocs, arakkoa, animals such as hounds, wolves, boars,[46] and so on.

When the human Malus took Xaraax's fel sword, it empowered and transformed him, his eyes blazed green with corruption. He stated that the fel flames whisper to him of victory and destruction.[47] 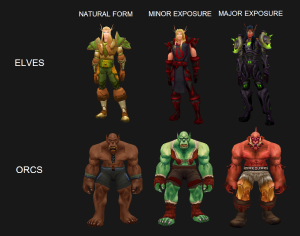 The ultimate manifestation of the demonic arcane on Azeroth is fel energy. Fel energy, which most commonly manifests itself as ghastly, green-yellow flame, is arcane magic at its most corrupt, for it employs the blood of demons.[48] Unlike arcane magic the use of fel magic corrupts the user's body and soul. By contrast, the chief danger of arcane magic is that using it inevitably leads to the desire to wield greater power: power that only fel magic can provide.[49] When the demons brought death and damnation to Azeroth, they also carried their own brand of magic to the world. Fel magic is pure, evil and arcane; it resides in the blood of demons. This blood has magical properties; it is addictive to arcane magic users and can be used to create evil weapons. When a weapon is forged in demon blood, it becomes a fel weapon. It glows with a foul, yellow-green fire and deals extra damage to good-aligned opponents. Some arcanists can cast fel spells, perhaps after drinking demon blood.[50] Since the Burning Legion returned to Azeroth, the world's heroes have encountered fel weapons and fel magic at an increasing frequency. As demon cults continue to fester and grow in Desolace, Ashenvale Forest, and other remote corners, gruesome sacrifices are held to entice demons into giving their blood in trade. The cultists use their blood to enchant the weapons that they hope will bring about their masters' ultimate victory.[48]

Demons sometimes tempt spellcasters by offering small amounts of their blood in exchange for services. If the recipient drinks the demon's blood within 24 hours of the offering, the next arcane spell he casts will be empowered by the fel. Fel blood is highly addictive as well as corruptive. Anyone who drinks it risks becoming dependent on fel blood, and unless the person continues to drink it daily, he will suffer withdrawal symptoms. He has a chance of breaking the addiction seven days after first drinking the fel blood.[48]

Spells with the fel descriptor are very difficult to resist. Casting a fel spell is described by many spellcasters as a euphoric experience. If arcane magic is an addiction, fel magic is the embodiment of the drug in its purest form.[citation needed]

A gray ore known as fel stone litters the physical spaces of the Nether. It functions as a conduit for the Nether's entropic energies.[52] 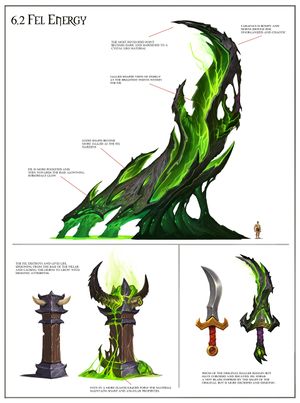