For the magic from the main universe, see Fel.

“A magic unlike any other. It feeds on life itself. It pollutes the user, twisting everything it touches. It promises great power - but it exacts a terrible price.”

The fel[2] (also known as death magic)[3][4][5][6] is a dark magic that poisons and corrupts. The fel offers great power, but feeds on life. In contrast to the light blue glow of arcane magic, fel magic glows a sickly green, and its corrupting effects can change whole creatures this color.

A warlord of a tribe of trolls wielded the fel magic. He was invulnerable to Medivh's arcane magic, but the Guardian used his magic to collapse the troll temple and kill the warlord. Quelen, a Guardian of Azeroth once studied the fel. He discovered that: Fel is the magic of evil; It uses life as fuel; It changes the user permanently. According to Moroes, it made Quelen worry about his own actions, every moment, turned him into a scared, bitter recluse. Medivh believed that any power, no matter how entropic, can be used to good ends.[7] 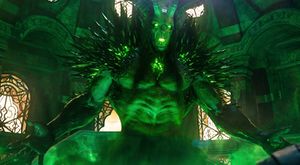 Medivh, transformed into a demonic form by the fel

Medivh experimented with the fel as a youth, believing he could control it, but was eventually poisoned and slowly corrupted. The fel would eventually take possession of him, forcing him to take actions against Azeroth, although he would afterwards lack memory of these events.

It was the fel that caused Medivh to consort with the orc warlock Gul'dan, and open the Great Gate to bring the Horde to Azeroth. The fel was discovered and recognised by Khadgar in the corpse of a human slain by the orcs during their first attacks on the Eastern Kingdoms, who brought the news to Medivh. Medivh was initially unable to understand how the fel had come to poison Azeroth, and set about attempting to eradicate its presence, but as the corruption took deeper hold he began to become weaker, needing longer to regenerate more frequently.

The fel was wielded by Gul'dan to great effect. Gul'dan believed he was the only one able to control the fel, and set about sharing its corrupting effects with the orcs of his Horde, using his control of the magic. The fel seemed to make the orcs grow larger and stronger, but at the price of the corruption of their faculties. However, the fel did not entirely corrupt them; most still held to their values, including a respect for tradition, even going so far as to rebel against Gul'dan when he failed to respect the mak'gora. The orcs were turned green by their exposure to the fel, and the lands around the orc encampment in the Black Morass likewise began to grow sickly.

While giving them great strength, the orcs' infection with the fel also makes them vulnerable to counters to the magic, as seen when Medivh used this knowledge to destroy the party of orcs in Elwynn Forest.[8] When confronted with this weakness Gul'dan denied it, which may indicate that his knowledge of the fel is far more limited than that of Medivh, or he may simply have been refusing to admit the downsides to his 'gift'.[9]

It was the fel that years earlier had begun to destroy the orcs' homeworld of Draenor, causing the climate to grown inhospitable and the plants and animals to grow sick and die.[10]

After doing his best to combat the spread of fel on Azeroth, Medivh was eventually overcome entirely and transformed by the fel into a demonic form. After he was defeated by Khadgar and Lothar, Khadgar was able to purge the fel from Medivh and the tower of Karazhan, apparently displaying a strength of will beyond that of the Guardian. With the fel purged, Medivh was returned to his former state and regained control of his actions.

The fel is seen in various forms. It is chiefly seen through its influence on the corrupted orcs, their skin turned green and their forms unnaturally large and powerful. Fel energy itself is seen in the magical font in the tower of Karazhan, as Medivh's corruption pollutes it.

After the orcs travel to the Black Morass, bright green pockets of fel can be seen glowing in the swamp's marshy earth. Gul'dan also keeps a huge brazier of fel fire burning constantly in his tent by the Great Gate.[11] When Blackhand plunges his arm into the fel fire as punishment for his failure, it begins to spread up to the rest of his body. The fel fire does burning like regular fire, but eats his flesh like a living thing, curling up his arm like an invading army.[11] When Durotan severs Blackhand's arm above the fel fire, the remaining portion falls to the ground, where it abruptly crumbles into scorched chunks.[11]

Gul'dan draining the life energy of a human prisoner

The origins of the fel are currently unknown. Duncan Jones explains that this may be expanded upon in future films:

I think that there is a looseness of the Source of the Fel. We know that Gul’dan’s got it. We don’t know how he got it. We know that Medivh’s got it. We don’t know how he got it. I think there’s enough of a looseness there that the existence of Sargeras can still exist within this retconning. And how much detail we ever get into that? You know, Sargeras originally being a protector and being uncorrupted and then him trying to set the Orcs against Azeroth. Is that going to explain to me why Lothar is doing what he’s doing? It’s too much.

But you know, it’s all still there and it’s all still possible. I would be thrilled if we get the chance to do a trilogy and maybe there’ll be a little bit more of that kind of background stuff? But I would rather say, “This is where we’re starting.” Maybe we’ll know a little bit more about the Fel, because I think that would be useful, but let’s move forward with the story we’ve got and start to deepen that out a bit.[12]