The Fel Horde[3][4][5] is the army of fel orcs who first served the pit lord Magtheridon and then the Illidari. They are headquartered in Hellfire Citadel and the Black Temple.

The prime constituents (and only example available thus far) of the Fel Horde are fel orcs and the demons that control them.

It is revealed by Caza'rez that the Horde is researching a method to restore the fel orcs to their original state.[6]

The Fel Horde was created after the Burning Legion sent Magtheridon to the remnants of Draenor, now called Outland, where the pit lord enslaved and corrupted the orcs with his blood.[3]

Magtheridon is now held captive by Illidan Stormrage, the new Lord of Outland — who uses the pit lord, and The Maker to forcibly corrupt more orcs to boost his growing army, many of whom are unwilling.

The Fel Horde went to war against the Alliance and the Horde during the Invasion of Outland. Eventually, adventurers killed Warchief Kargath Bladefist and brought his fist to their faction's leadership in order to usher in the end of the Fel Horde's reign of terror.[7][8] Ultimately, the adventurers delved deeper into Magtheridon's Lair. There they slew the Hellfire Channelers that were holding the pit lord captive, and ultimately slew Magtheridon himself. Without Magtheridon's demon blood to taint Outland's orcish population, Illidan could no longer create new fel orcs, but others still operated within the ranks of the Illidari, namely the Dragonmaw clan.

Clans of the Fel Horde 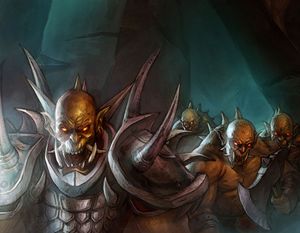 The membership of the Fel Horde is largely the remnants of the Horde of Draenor, which was ruled by the shaman Ner'zhul during the time of the battles of the Invasion of Draenor. It should be noted that many (perhaps all) of the clans listed below are in fact divided, and do not universally support the Fel Horde. (For example, members of the Shattered Hand clan also reside in Orgrimmar as its rogue's guild and dutifully serve Thrall.) The Shattered Hand orcs that live in Orgrimmar, however, left Draenor twenty years ago and are not fel orcs (they still have green skins and the such).

For our purposes, however, large groups of orcs from the following clans have been captured, brought to Hellfire Citadel and become fel orcs, and now collectively obey Warchief Kargath Bladefist. While the former leaders of these old Horde clans did not all survive, some clans such as the Bonechewer clan and the Bleeding Hollow clan still operate under the dominance of their own clan-specific Chieftain as well as Kargath.

Although the term Fel Horde has been used to refer to the orcs in Hellfire Peninsula and Hellfire Citadel, mainly the Shattered Hand clan, it is believed that the Fel Horde is a new term for all orcs affected by the demonic corruption that was being siphoned out of the pit lord Magtheridon and were loyal to Illidan Stormrage and his Illidari. It may be somewhat confirmed by the appearance of the Bonechewer and Shadowmoon orcs in the Hellfire Citadel. Illidan Stormrage had gathered tens of thousand fel orcs, apparently of various clans (and not just the Shattered Hand) that would eventually be the Fel Horde.