Fel Lord Zakuun is a boss in Hellfire Citadel in Tanaan Jungle. This boss is a gear check for the bosses of the upper-wing. 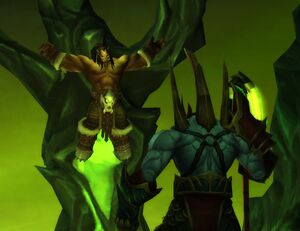 Speculated by some scholars of the Legion to be an evolved version of the common felguard, Fel Lords serve as enforcers in the direct service of Archimonde. Their cruelty is matched only by their brute force. Zakuun was set to a task that called upon both of these traits in equal measure: breaking the iron will of a stubborn and defiant orc chieftain of the Warsong Clan....

This Fel Lord represents a type of demon never before seen by players. We approached this encounter with the intent that it be the “Patchwerk” of the zone—that is to say, a heavy melee bruiser without companions—but of course he has a few tricks up his sleeve that will keep players on their toes.

Zakuun alternates between attacking with his axe, and flinging it to the ground to strike with his fists, modifying his abilities in the process. Throughout the encounter, Zakuun attempts to form Fel Crystals, though players may prevent this process by absorbing the energy themselves. In either case, some of Zakuun's abilities will trigger a massive explosion if they strike either a Crystal or a player with absorbed Latent Energy.

The fight requires two tanks. Bloodlust should be saved for the third and final phase. Fel Lord Zakuun should be tanked in one of the room's corners.

Phase One: The main mechanic of this fight is the Rumbling Fissures/Fel Crystals. The boss will periodically create about 5 Rumbling Fissures in the ground (green-black swirls). A designated group of 4 players, preferably ranged and healers, should stand in 4 of the fissures, leaving one as far away from the group as possible, or in a corner. Those who absorb fissures will be affected by a debuff that lasts two minutes called Latent Energy. This debuff is important because if a player either gets hit with one of the Wake of Destruction shockwaves or tries to absorb another pillar while the debuff is active, they will explode and cause a massive amount of raid-wide damage. The raid may be able to tank one explosion when capped off, but multiple ones will wipe the raid. Wakes will spawn when Zakuun casts Cavitation, swinging his axe either behind him or to the side and sending out multiple wakes in one direction. As those who soaked the fissures are ranged and healers, they should have enough time to move away, but an explosion will also result if one of the wakes hits the Fel Crystals. Players without Latent Energy must move and soak the wakes with their bodies if the wakes are moving towards the crystals.

Tanks will swap when the boss casts Soul Cleave, sending one tank into the void for about 15 seconds. The disembodied tank must dodge and jump over the shadows and shockwaves until the debuff wears off and he comes back. When a tank leaves the void, they leave behind a shockwave-making ball of energy where they left. Thus, when the debuff is about to expire, stand far away from where the boss is being tanked. For healers, Zakuun casts Befoul, which is a healing-absorption debuff, on several non-tank players. This can be easily be healed through, but when the debuff expires, it creates aoe-damage to anyone within 6 yards, so those with Befoul should move away from the group to be healed.

Phase 2: Zakuun throws his axe to the ground and gains Unarmed. Despite what one would expect, Zakuun now not only hits harder and faster, but also cleaves and hits two targets at once. If two targets are not hit by his unarmed blows, Zakuun hits the one target twice ala Patchwerk. Both tanks need to stack up when Zakuun throws his axe and let the boss come to them, with melee staying behind him. Ranged and healers need to stack in a circle, with those who still have Latent Energy on the inside of the circle. Seeds of Destruction will be planted on several players, creating wakes in all directions once it expires. The circle is so that those with Latent Energy are protected by those who do not have it and can be more easily healed since Zakuun's discarded axe will be radiating raid-wide damage. Those with Seeds must drop the debuff as far away from the crystals as possible and/or have the group positioned between them and the crystals. After about 30 seconds, the phase ends and transitions back to phase 1 with Zakuun picking up his axe again.

Phase 3: The boss begins using all of his abilities from phase 1 and 2 at once. Continue the circle strategy from phase 2, but be ready to move for both Befoul and Seeds of Destruction, in addition to blocking Cavitation from hitting the crystals. With so many wakes and movement, it is likely that at least one explosion will be triggered. Activate Bloodlust and use healing cooldowns wisely to endure any potential explosions until he goes down.

Aggro
We will reap your souls.

Rumbling Fissure
Behold the power of the Legion.

Soul Cleave
We will cleave your souls in twain.

Wake of Destruction
Yes... we leave destruction in our wake.

Seed of Destruction
We sow the seeds of your demise.

Picks up weapon
We are as one.

Losing
Fel Lord Zakuun says: See how they struggle, not even their combined might will be enough to save you.
Grommash Hellscream says: I will have your skull for my helm when I next face your foul Legion.

Winning
Grommash Hellscream says: Heh Heh Heh, they are besting you demon.
Fel Lord Zakuun says: No matter, we will crush you all.

Enrage
We are unstoppable!

20%
Grommash Hellscream says: Finish him, heroes, that I may drive that cursed axe down his throat, and cut out his fel heart!

Wipe
We will consume this puny world!

Death
Fel Lord Zakuun yells: We are... bested.
Grommash leaps towards the Fel Lord's corpse and starts carving his trophy.
Grommash Hellscream says: My thanks to you, now leave me. I have a trophy to carve.

Outro (Killed third)
Archmage Khadgar yells: The portal is nearly complete, the next seal has been removed.

Outro (Killed last)
Archmage Khadgar yells: The portal is unlocked! It will take us directly to Gul'dan. Now he will pay for his crimes.