For lore about warlocks, see Warlock.

During the Third War, Chaos Warlocks first appeared when the Warsong clan orcs drank the blood of Mannoroth and turned evil. Later, fel orc warlocks were first seen serving Magtheridon in Outland during the campaign of the ascension of the Lich King.

The only difference seen between the two is that Chaos Warlocks cost 260 gold and their defense type is light instead of normal. 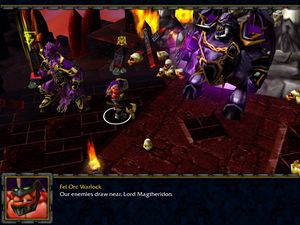 They have the ability to cast fire bolts, to induce frenzies on allied units and cripple enemy targets.