Not to be confused with Burning Crystal or Mana crystal. 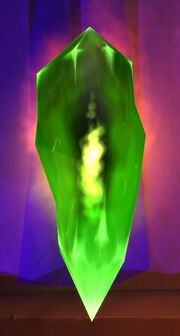 A Fel Crystal at Magisters' Terrace.

Fel crystals, also known as demonic crystals,[1] are floating crystals that are used to imprison and store demonic energies or entities.

The blood elves notably enslaved the fel by imprisoning demons,[2] which they used to maintain their architectural structures.[3] As of the Invasion of Pandaria, the fel crystals of Quel'Thalas seem to be gone or depleted of their imprisoned demons, as Grand Magister Rommath states that the crystals were "once" used to enslave demonic energy.[2]

The Burning Legion makes extensive use of fel crystals as power batteries and anchors for their various structures and defenses such as the spires of woe.