For orcs in general, see Orc.

Fel orcs (also known as chaos orcs and blood orcs)[1] are corrupted orcs created by the continual consumption of pit lord blood, which has caused them to be completely consumed by madness and bloodlust.[2] Most could be found in Outland as members of the Fel Horde, loyal to the Illidari. After the alternate Gul'dan took control of the Iron Horde and bound it to the Burning Legion, many orcs of the alternate Draenor became fel orcs as well.

The fel orcs were first noted as members of the Burning Blade clan during the First War. They made a greater appearance in the form of the corrupted forces of Grommash Hellscream. Fel orcs made the bulk of the army of the former ruler of Outland, Magtheridon. When Illidan Stormrage overthrew him, he took control of his Fel Horde and imprisoned the pit lord, using his blood to produce more fel orcs. They are easily distinguishable from regular orcs by their red skin, glowing red eyes, longer tusks and the spiky growths all over their body. The alternate Draenor fel orcs are the result of orcs drinking the blood of Mannoroth and have similar features to the Outland ones, albeit with black and grey skin and glowing green eyes instead of red.

Fel orcs fought under the banner of the Burning Blade clan during the First War. Some of the orcs who passed through the Dark Portal were driven mad, becoming fel orcs and joining the Burning Blade.[3] 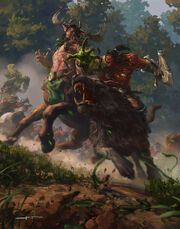 Fel orcs made their second appearance in the form of orcish warriors that followed Grom Hellscream during the New Horde's initial excursions into Ashenvale Forest. After being nearly destroyed by the forces of the demigod, Cenarius, a Darkspear shaman alerted Grom of a nearby font of dark magic that could be useful to them in defeating Cenarius and his night elven forces. This font ended up being the Chaos Well; a fountain of power that was tainted with the blood of Mannoroth. Upon their second consumption of Mannoroth's blood, the orcs were transformed into fel orcs, turning red skinned and larger. [4]

This allowed for Grom and his Warsong clan to make quick work of the Shadowleaves, Moonhunters, Nightblades and Cenarius himself. With Cenarius' demise, Mannoroth revealed himself to the orcs and declared they were once again under his thrall. Despite initial resistance, Grommash and his warriors fell inline under the Legion's forces. This led to Thrall banding together with Jaina Proudmoore at the behest of the guardian, Medivh, to stop Grommash. Capturing Grommash and locking him within a ritual circle, the united forces of humanity and the orcs were able to purge the fel corruption from Grommash, returning him to his normal orcish self. This gave way for Grom and Thrall to confront Mannoroth, ultimately leading to the former's heroic sacrifice that freed the orcs from the blood curse.

When the pit lord Magtheridon took control of Outland, he created fel orcs by corrupting them with his blood. Fel orcs made up the backbone of Magtheridon's armies.

After Magtheridon was defeated by Illidan and imprisoned, the fel orcs stayed in Hellfire Citadel, keeping guard over the captured pit lord as servants of Illidan. Illidan has continued using the blood of Magtheridon to create more fel orcs to follow him under Kargath Bladefist and his Fel Horde. A letter recovered from one of the orcs has revealed that Illidan is not pleased with the orcs' progress with the defense of the Blood Furnace.[5] They are capturing many orcs, and Mag'har, then experimenting on them to create fel orcs.

Caza'rez of the Horde is working on a cure for the fel orcs converted by the Illidari.[6] 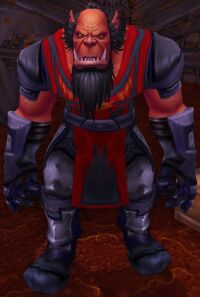 Quartermaster Dekrok, may be a fel orc.

Red skinned orcs appear as one of the random Horde Portal-Sentries that are guarding the Dark Portal for the Horde along with the Alliance. The general goods vendor, Quartermaster Dekrok, also has a red-skinned orc model. They may be horde aligned fel orcs, another color of Mag'har, or this may be a simple skin error.

Shadow Lord Fel'dan appears as a fel orc and is said to be more demon than orc now.[7]

A group of Dragonmaw fel orcs, led by the former Illidari lieutenant Mor'ghor, traveled from Outland to the Twilight Highlands to enslave the Dragonmaws who had remained on Azeroth. However, Mor'ghor and his fel orcs were defeated by the forces of Garrosh Hellscream, Warchief of the Horde, and Warlord Zaela of the Dragonmaw.

Kilrogg Deadeye as a fel orc, after accepting Gul'dan's gift.

On the alternate Draenor, Gul'dan and his followers were described as fel orcs, but had green skin rather than red skin and mutations. Sean Copeland clarified that these orcs are fel-corrupted but not true "fel orcs."[8]

After the Iron Horde suffered devastating losses, Gul'dan took control of the faction by capturing Warchief Grommash and convincing Kilrogg Deadeye, Warlord of the Bleeding Hollow clan, to drink the blood of Mannoroth (who had much earlier been slain by Grommash) and transform into a fel orc. Thousands of Iron Horde orcs then accepted the blood of Mannoroth, transforming them into fel orcs as well, but none grew as powerful as three champions: Dia Darkwhisper, Gurtogg Bloodboil and Blademaster Jubei'thos. Tainted with fel sickness, the three began serving Gul'dan as both Highguard and Council of War, becoming known as the Hellfire High Council.[9]

Fel orc forces can be found serving the Legion throughout Tanaan Jungle — mainly at the Iron Front, the Fel Forge and atop the Throne of Kil'jaeden — and in the halls of Hellfire Citadel. The Hand of the Prophet draenei forces stationed in the jungle argued that if their leader, Prophet Velen, were there to guide them, he would not simply give up on the entire race, and while the draenei's eredar brothers are seemingly lost forever, the orcs of Azeroth did manage to break free from the Burning Legion. Thus, Alliance heroes were sent out to gather vials of fel orc blood for draenei scholars to study in the hopes of finding a way to reverse the corruption process.[10] Similarly, Lady Liadrin and her Blood Knights believed there to be a way back for the fel orcs and also asked for blood samples from freshly turned orcs. However, not every member of the Horde forces in Tanaan had as bright of an outlook on the fel orcs' chance at redemption.[11]

While much fewer in number, some fel orc members of the Shadow Council resembling the ones from alternate Draenor can be found on the Broken Isles, such as Lord Malgath in the Assault on Violet Hold.

Other fel orcs from Outland can also be seen imprisoned in the Vault of the Wardens. 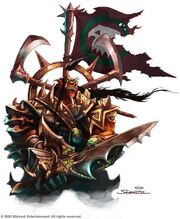 Concept art of a fel orc.

The consumption of pit lord blood results in a blood haze, uncontrollable bloodlust, and physical changes as well.[2] Even those who were transformed unwillingly end up exhibiting these traits, and end up forced to obey the supplier of the blood. The Illidari fel orcs are produced using an elixir. The procedure is extremely painful, and tends to drive subjects mad.[12]

The standard Outland fel orc has red skin, and a ridge of long sharp spines coming out of its back. Bony horns grow from its arms and hands. Its eyes are bloodshot and glow red, and six long and thin fangs grow out of its mouth. Its ears are stubbier than orc ears, coming to a blunt point. These features signify a fel orc as much as its maddened lust for destruction.[2] Fel orc blood is described as bubbling, as if full of rage.[13] Most fel orcs have lived for years in Outland with the corruption, and this has led to greater mutations. These fel orcs are formidable foes, with even the weakest among their number being just as powerful as any normal green-skinned orc.[14] They are also larger, meaner, and more cunning than the average orc.[15]

The fel orcs of alternate Draenor instead feature gray skin with black, horn-like growths, glowing green eyes, and glowing green "cracks" on the skin and aforementioned growths. The reason for this difference in appearance is unknown, as Gul'dan himself, who had previously drunk the blood of Mannoroth, only gained green skin and red eyes, without the gray skin and mutations. According to Vindicator Krethos, Gul'dan's poison turned the already ferocious orcs into "hateful, vicious creatures with no soul"[10] while Shadow Hunter Denjai describes the fel orcs as "monsters", "fel beasts" and "soulless savages".[11] The blood of Draenic fel orcs remains warm to the touch long after the orc is killed.[16]

Fel dire orcs of the alternate Draenor instead have red skin like their main universe counterparts. 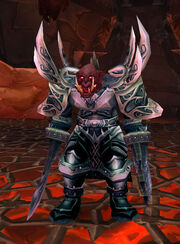 Banner of the Fel Horde.

Here follows a list of known clans that, at least parts of which, have allied with the Fel Horde:

Fel orcs, also known as chaos orcs, are the creation of Mannoroth, who "blessed" the orc race by infusing within them fel energies and binding their will to the Burning Legion. While Grom's sacrifice freed most of his race, many orcs remain loyal to Mannoroth and worship the demons, gaining tremendous strength in exchange for their service. While not all demon-worshiping orcs are fel orcs, more than enough still partake of demon blood for the strength it grants them.[18]

A possible explanation for the difference between the alternate Draenor's Gul'dan and the fel orcs, who both drank Mannoroth's blood but gained vastly different appearances, may be the "freshness" of the blood; Mannoroth had been dead for some time before the fel orcs of alternate Draenor drank his blood, unlike Gul'dan.