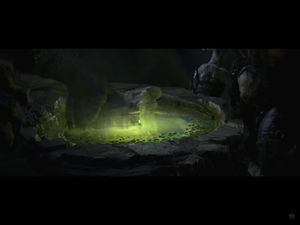 Felblood (or fel blood) is a term that refers to the blood of demons.

For the main article, see Blood-curse.

A Blood Curse is the curse laid upon beings when they consume the blood of demons.[citation needed]

“There is no telling what the inexperienced might do with a draught of demon's blood.”

The blood of most demons holds a substantial amount of power.[2] When the felblood covers one's body, the individual may hear the whispers of Sargeras. It may also cause a short transformation into a demon.[3]

In an alternate timeline when Gul'dan drank demon blood the blood transformed his visage into something hideous, bent and twisted by demonic energies.[4]

The felblood used by Gul'dan on alternate Draenor appears to create eredar and fel orcs with different appearances, with cracked skin exposing fel energy for the Eredar and grey skin, massive apparently metallic deformities across the body and more extreme asymmetric claws and spines for the orcs. This could indicate another source for the felblood than in the Prime Timeline.

Gul'dan used felblood to mutate Razuun and Giselda into a man'ari eredar and a shivarra, respectively. Even after Mannoroth's death his demonic blood was used to transform orcs into fel orcs, draenei into eredar and cursed arakkoa into winged arakkoa. Some goblins in Hellfire Citadel appear to be affected by felblood or some other corruption.[5] Gul'dan appears to be able to acquire more felblood after Mannoroth was slain.[6]

The ultimate manifestation of the demonic arcane on Azeroth is fel energy. Fel energy, which most commonly manifests itself as ghastly, green-yellow flame, is arcane magic at its most corrupt, for it employs the blood of demons.[7] Unlike arcane magic the use of fel magic corrupts the user’s body and soul. By contrast, the chief danger of arcane magic is that using it inevitably leads to the desire to wield greater power: power that only fel magic can provide.[8] When the demons brought death and damnation to Azeroth, they also carried their own brand of magic to the world. Fel magic is pure, evil and arcane; it resides in the blood of demons. This blood has magical properties; it is addictive to arcane magic users and can be used to create evil weapons. When a weapon is forged in demon blood, it becomes a fel weapon. It glows with a foul, yellow-green fire and deals extra damage to good-aligned opponents. Some arcanists can cast fel spells, perhaps after drinking demon blood.[9] Since the Burning Legion returned to Azeroth, the world's heroes have encountered fel weapons and fel magic at an increasing frequency. As demon cults continue to fester and grow in Desolace, Ashenvale Forest, and other remote corners, gruesome sacrifices are held to entice demons into giving their blood in trade. The cultists use their blood to enchant the weapons that they hope will bring about their masters' ultimate victory.[7]

Demons sometimes tempt spellcasters by offering small amounts of their blood in exchange for services. If the recipient drinks the demon's blood within 24 hours of the offering, the next arcane spell he casts will be empowered by the fel. Fel blood is highly addictive as well as corruptive. Anyone who drinks it risks becoming dependent on fel blood, and unless the person continues to drink it daily, he will suffer withdrawal symptoms. He has a chance of breaking the addiction seven days after first drinking the fel blood.[7]