For other uses, see Felguard (disambiguation).

Felguard (or Fel Guard)[2] are demons of the mo'arg race that serve as the Legion's rank and file demonic soldiers and front-line troops.[3] They are fearless and unwaveringly loyal to their master's godlike will.[4] They are almost always seen with heavy, two-handed weaponry. They are slow to strike, but hit quite hard, and are more agile than they look.[5] Felguard are among the demons Sargeras fought against while he was still part of the Pantheon.[6]

During the Battle for the Broken Shore which marked the beginning of the Burning Legion's third invasion of Azeroth, felguard units managed to injure both leaders of the Alliance and the Horde, High King Varian Wrynn and Warchief Vol'jin. The former was impaled and held for Gul'dan, while the latter was fatally poisoned with fel through a spear wound. 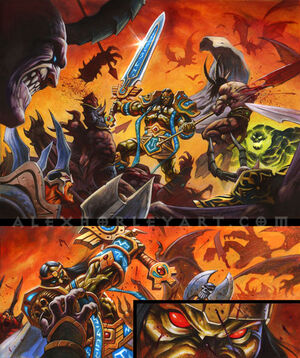 The felguard are tall, broad-shouldered, muscly celestial[7] warriors who wield weapons of a generally twisted, curving variety. The felguard's skin ranges from blue, red, yellow/orange to various shades of these colors and black. They tend to stand anywhere from 6 to 8 feet,[citation needed]  though some are reported to far exceed these sizes. There appear to be a few breeds, or races, within the felguard caste of mo'arg. The majority have large horns or spines protruding from their backs, and smaller ones on their forehead.

Felguard armor tends to cover their right arm, legs, back and head, and they seem to choose from a small variety of giant, cruel-looking axes or swords and have not been reported to use shields or other types of weapons. The felguard legs are always covered in armor when they are in combat.

Please add any available information to this section.
Felguards can be found in the Tainted Scar and around the The Dark Portal in Blasted Lands, Mannoroc Coven in Desolace, Demon Fall Ridge and Demon Fall Canyon in Ashenvale, Darkwhisper Gorge in Winterspring, and in most of Outland.

Taragaman the Hungerer of Ragefire Chasm is a notable felguard, due to his relative importance suggested by Neeru Fireblade, in the quest

[16D] Slaying the Beast. Seeing as Ragefire Chasm is an original instance, lore-wise, he is a felguard and therefore a demon, while with in-game gameplay mechanics, he is a humanoid. This is merely for balances purposes. It is worthwhile noting his weapon is different than most other felguard.

A felguard in The Frozen Throne.

The felguard operate under the direction of doom guards, pit lords, and other Legion commanders and generals. Felguard are treated like fodder troops, driving the Legion's attack on the universe forward like a relentless force of nature.[8] While most other demons rely to some extent on magic and trickery, felguard eschew these subtleties, instead relying on sheer strength to overwhelm their foes. While under the command of a higher-ranking demon or a warlock, a felguard makes the perfect soldier. Each is a disciplined follower outside of combat, calm and patient. When commanded to fight, however; they become wild and merciless, an army of raging felguard is a terrifying sight.[9]

Felguard are only trained in fighting, so that's about all they do. In combat, they split up to take on as many foes as possible. At first glance, this tactic might seem like a mistake since it divides their power, but this is just for a short while. The felguard use this tactic to locate weakness in the enemy lines. Once a weak opponent has been located, all nearby felguard retarget to this individual. Felguard are good at coordinating their attacks and flanking their opponents.[8] A raging felguard is reckless, but not stupid. It coordinates well with its allies and usually obeys orders (if it can hear them over its deafening battle cries). A felguard loves battle, sometimes refusing to flee from a combat that it believes it has a chance of winning. Demonic generals know and accept this limitation, and plan their strategies accordingly.[1]

The felguard are members of the mo'arg race, but bear only a passing resemblance to their engineering brethren; possessing a straighter posture, greater musculature and lacking the level of mechanical prowess that mo'arg and gan'arg engineers are known for. The reasons for this have not been made entirely clear by Blizzard. Since felguard have existed since before Sargeras' fall, it is possible that the mo'arg race has always had these subspecies. It's also possible that felguard are the original mo'arg race and Sargeras transformed some of them into the smaller engineering types for his Burning Legion, or the other way around. The lack of the engineers' presence in events predating those in The Burning Crusade would seemingly support them being a recent addition. However, the developer insight for the Iron Reaver fight reveals that the mechanized side of the Legion isn't typically deployed until later stages of an invasion.

One would assume them to have feet akin to humanoids because of their leg structure, which doesn't seem to support hooves.