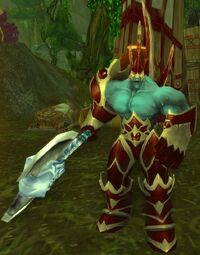 The Felguard is a demonic minion available only to Demonology warlocks. It is summoned through the

The Felguard acts as a 'permanent' pet, unlike the Doomguard and Infernal. This minion, like the other permanent minions, will receive a random name that can be changed by visiting a Demon Trainer.

As a warlock pet, the felguard possesses five abilities that help it excel in combat.

[Legion Strike] is its basic damage ability to help it cause damage in addition to its melee attack.

[Pursuit] helps with catching up to enemies.

[Demonic Empowerment]: Increases the Felguard's health by 20%, its Haste by 50% and its damage dealt for 12 seconds.

Voiceovers when given a command