This article is about the racial information. For other mobs, see Felhound (disambiguation). For the Warcraft III: Reign of Chaos unit, see Fel Stalker (Warcraft III).
Not to be confused with fel wolf or felstalker. 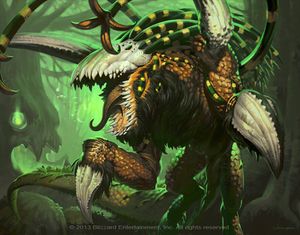 Felhounds (also known as fel hounds,[1] felbeasts,[2] felhunters,[3] hellhounds,[4] manastalkers,[5] fel demons[6] and fel stalkers[7]) are ugly, red, spined creatures from the depths of the Twisting Nether.[8] Felhounds are demon hounds used by the pit lords to sniff out sources of magic wherever they be found. Felhounds, who feed upon magic itself, are fond of draining the energies of hapless wizards and then ripping their bodies to shreds.[9] They serve as the forerunners of the Burning Legion.[10] 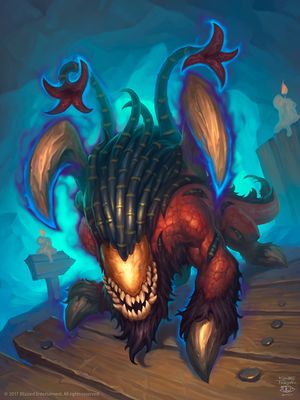 Not of natural origins,[11] felhounds are demons out of nightmare, in some ways lupine in form, but monstrously distorted, as if some insane god had created them out of the depths of his madness.[12] The face most resembles some peculiar cross between a wolf and a reptile and from their long, savage jaws jutted scores of tall, sharp teeth. They have low-set horns that curled down and forward, their scaly hides were colored a deathly crimson accented by savage splatterings of black, their backs fluttering a crest of wild, shaggy brown fur. Each three-toed paw ending in sharp claws more than half a foot long and their back legs slightly shorter than the front. Atop their backs thrust two long, whiplike, leathery tentacles that ended in tiny sucker mouths.[13]

The scourge of any spellcaster,[14] the felbeasts were an especially insidious foe, for they hunted those with the gift for magic and drank from them until nothing but husks. It mattered not whether a spellcaster was a sorcerer, wizard, or druid, the magic that they used quickly became a part of them. By draining the magic out of its victims, the beast also devoured their life force.[15] Given enough energy to devour, the demonic hounds could multiply themselves several times over, creating an epidemic of evil. Rhonin had studied their corpses and read all the information gathered about them. He had heard tales of the hounds multiplying themselves, but only have gorging on magic.[16] During the first Burning Legion invasion, the felhounds were commanded by Hakkar the Houndmaster. With a crack of his magic whip, he could summon them into existence from the demonic plane.

“The Legion has sent Hellhounds to aid us! The beasts are yours to command, Death Knight.”

— Kel'Thuzad during the summoning of Archimonde

Upon the summoning of Archimonde the Defiler, the Burning Legion sent seven of these beasts to assist the death knight Arthas Menethil in defending the lich Kel'Thuzad from the Kirin Tor, the Mages' Guild, and the Sorcerer's League.[17] Since the felhounds possessed the Mana Burn ability, they were highly effective against enemy spellcaster units, such as Priest, sorceresses, and even archmage heroes.

Later, while larger demons, such as infernals and doomguard destroyed buildings, the felhounds would go after the human villagers and kill them.[18] Some of them alongside doomguard guarded Grommash Hellscream's chambers in the Barrens. Thrall killed these demons in order to gain access and utilize the soul gem on Grom as part of Jaina Proudmoore's plan to free him from the Legion's influence.[19]

They also appeared in Felwood where they made up a few of the attack waves on Illidan Stormrage's base and also protected Tichondrius.[20] Many of the attack waves launched against the stalwart World Tree defenders (humans, orcs, and night elves) would frequently be composed by felhounds.[21]

Felhounds ripped from the Nether.

Felhounds first appeared in Warcraft III: Reign of Chaos. They were as fast as Knights, as resistant as an un-upgraded Grunt, and possessed the Mana Burn ability, which deducted a target enemy's current mana pool by a maximum of 100, dealing damage equal to the amount of mana burned. They also had a Chaos type attack, making them more effective against buildings than regular units. 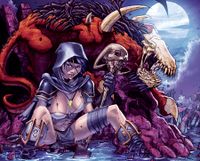 A warlock and her felbeast. 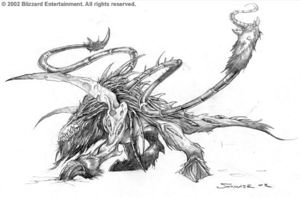 Pit lords grow felhounds somewhere in the Twisting Nether. Felhounds do not speak, though they understand Eredun. Felhounds treat spellcasters, particularly arcane spellcasters, as layered desserts with meat on the outside and magic on the inside. Less magical characters are worth notice only if they have damaged a felhound.[23]

Fel stalkers are the hunting hounds of the pit lords, starving both for blood and for arcane energy. The corner of the Twisting Nether that spawned them is a void, drained of magic and substance and filled with drifting corpses. Maggot fel stalkers embedded in the nearby planar substance mature, hunt, and often lay young before the pit lords rangers find them and train them. Fel stalkers have been observed with 2, 4, or 6 legs which indicates breed rather than power. Fel stalkers treat spellcasters, particularly arcane spellcasters, as layered desserts with meat on the outside and magic on the inside. Less magical characters are worth notice only if they have damaged the fel stalker in battle. Fel stalkers generally use their arcane vortex ability whenever in combat, unless instructed otherwise by their pit lord.[24] Other Felhounds are the adamantine stalker.