Felhounds of Sargeras is a boss encounter in Antorus, the Burning Throne. The two hounds are F'harg and Shatug.

When troops from the Army of the Light were attempting to pull back from Fiend's Run in the Antoran Wastes, F'harg and Shatug were sent out to harry them; merely racing around and trampling the soldiers was enough to seriously injure them. Fortunately, an order hall leader was able to rescue many of the troops from certain death, though Turalyon was sure they would remember the howls of the Felhounds even as they marched on Antorus's gates.[1]

Infused with fire and shadow, F'harg and Shatug are the prized pets of Sargeras. Bred for carnage, these hounds delight in eviscerating their master's enemies.

With the Army of Light and their allies advancing upon Antorus, the Legion prepares to unleash these vicious creatures onto the battlefield and put an end to the mortals' invasion.

The Felhounds of Sargeras combat players while performing attacks at specific power thresholds, but each has their own power generation rate. Focusing Power temporarily suspends this power generation. While within 40 yards of each other, Sargeras' Blessing imbues them with 100% increased damage. 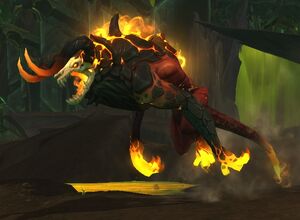 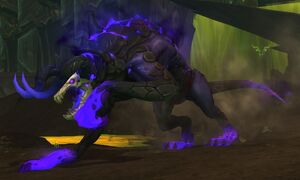 Intro
Illidan Stormrage yells: Sargeras has left us a few of his favorite pets to play with. Remove these abominations from the battlefield.