[Summon Felhunter].
Not to be confused with fel wolf or felstalker. 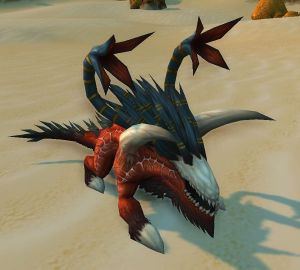 A felhunter in World of Warcraft.

[Summon Felhunter] ability, available at level 30. Thanks to

[Shadow Bite]'s increased damage for every DoT on a target, the Felhunter is the pet of choice for Affliction warlocks when it comes to damage output.

It deals melee damage and possesses several anti-caster abilities. It has the same amount of health as the Succubus; more than the Imp but less than the Voidwalker.

The felhunter possesses four abilities, each handy in specific scenarios: 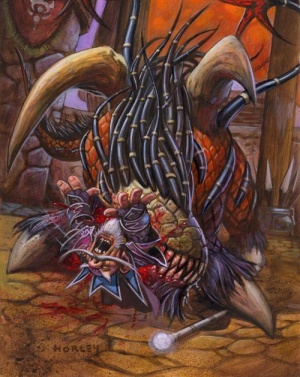 A felhunter eating a gnome. 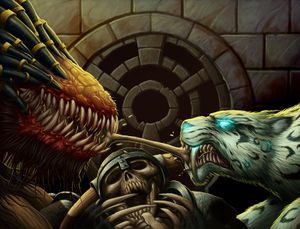 A felhunter fighting with a spirit beast over a bone.

The felhunter is a pet available to the warlock at level 30. Prior to patch 3.3, it required a quest chain to earn, as can be seen below.

Talk to warlock trainer Strahad Farsan to obtain these quests: 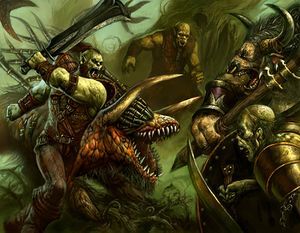 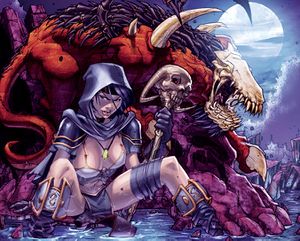 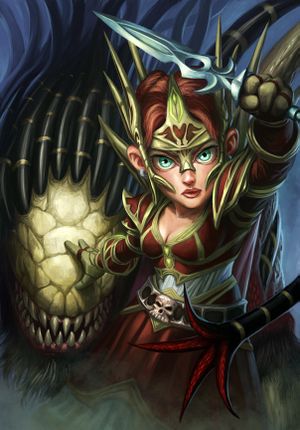 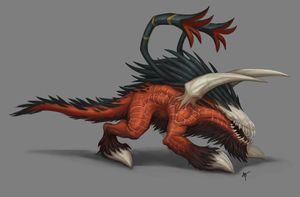 Felhunters are fel stalkers that have been specially trained by the Burning Legion to hunt, counter and devour mortal spellcasters.

The most intelligent of fel stalkers are selected and trained specially to hunt spellcasters. They look much like a normal fel stalker, except for a golden band placed around one of their horns marking them as hunters. Normal fel stalkers prefer spellcasters, but fel hunters are so well trained that they ignore melee opponents entirely in favor of spellcasters, especially arcane casters. A fel hunter has the same abilities as a fel stalker. It also manifests demonic spell-like abilities - brought out due to its higher intelligence, coupled with the intense training it undergoes to become an elite spellcaster killing machine.[1]