For the warlock ability summons this type of creature as a mount, see 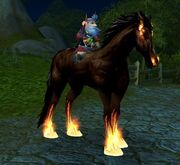 Felsteed as a warlock mount.

Felsteeds (or fel steeds and nightmares)[1] are a type of demonic horse that are part of the forces of the Burning Legion.

The remote plains of Desolace were once home to a unique breed of horse too proud and wild to countenance riders. Yet it is precisely this willful conceit that enticed the elders of the Shadow Council to bind these majestic steeds to their service with dark rituals too horrific to perform by any but the most depraved of warlocks. Although they retain their imposing forms, these newly-christened felsteeds have become twisted with infernal energies, treading flames and breathing fire. Where their eyes once shone with exuberance and a zest for life, they now burn with hatred for the warlocks who corrupted them and anguish at the passing of the lives they once knew.[2]

A demonic hollow in the east of Desolace, Shadowbreak Ravine, is home to a fair number of Shadow Council members. The ravine has several buildings, including a few stables that house felsteeds, most likely to be bound to the will of Shadow Council warlocks.

Some felsteeds were stabled in Shadowfang Keep.

A rare felsteed roams the mountains of Searing Gorge from time to time, his name is Shleipnarr. Jezelle's Felsteed can be found in Undercity, under the ownership of Jezelle Pruitt.

A Fel Steed, NPC with a Battle for Azeroth updated horse model.

Fel Steeds in Shadowfang Keep are tamable by hunters as part of the courser family.

"This large, powerful horse has a brown coat and smoldering eyes. Flames flare from its nostrils and wreathe its hooves, leaving a scorched trail in its path."

Felsteeds are the fiery equine servants of the Burning Legion. At one time, they were common horses that became enslaved and fell to the Burning Legion’s sinister influence. Now corrupted and evil, they feel both intense loyalty and burning hatred toward their demon masters.

Many warlocks choose a felsteed as a fel companion for the practical convenience of travel on demand. To the felsteed, there is no difference between a mortal master and a demon — both deserve its contempt and obedience.[3]

Nightmares are a type of creature that live in the Twisting Nether. They can be encountered alone, or encountered in a night hag covey, which is three night hags mounted on nightmares.[4]