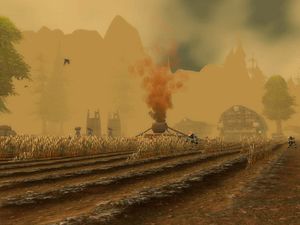 Felstone Field is located in northwestern Western Plaguelands. Originally, the area had been a life-sustaining farm, but it was overrun by the vile Scourge. In their quest to destroy the living, they placed a large cauldron in the middle of the field which constantly spewed disease-filled vapors into the air. The cauldron itself was protected by Cauldron Lord Bilemaw, Skeletal Sorcerers, Skeletal Flayers and Slavering Ghouls.

A Scarlet Crusader party was also detected in Felstone and would destroy both players and Scourge with equal vengeance.

Inside the house in the northeastern corner of the field was a friendly NPC, Janice Felstone, who offered a quest. 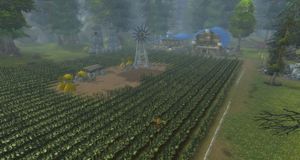 After the Cataclysm, Felstone Field was cleansed of the Scourge and rebuilt. It was populated by Alliance Laborers. The area is phased to show Alliance Laborers, the default phasing is not to have any NPCs.

Apothecary Dithers, under orders of Lindsay Ravensun,[1] took samples of the original Plague of Undeath from the diseased bears of Western Plaguelands and created plague drums. These drums were deployed as bombs to kill the farmers in Felstone Field and undo the healing achieved by the Argent Crusade and Cenarion Circle.[2][3] 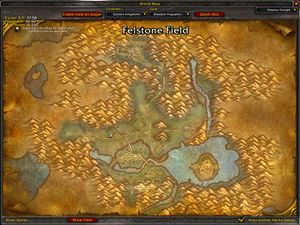 A map of Felstone Field, located in the Western Plaguelands.

The farm is a fossil archaeology dig site.