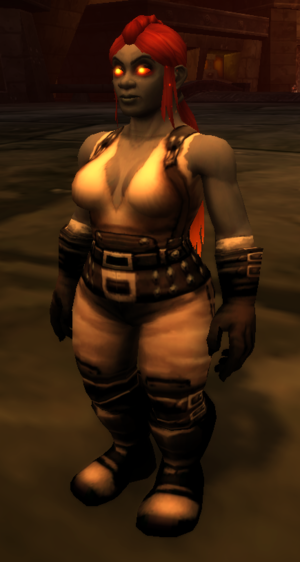 Fenella Darkvire is a Dark Iron dwarf and the daughter of the much-reviled Dark Iron architect Fineous Darkvire, and, despite her father's reputation, one of Moira Thaurissan's premier architects. She is known for the construction of the Ruby Crystalarium in Shadowforge City.

Fenella was blackmailed by Moira, alongside Carrick Irongrin and Fendrig Redbeard, into aiding Foreman Raiki and his pandaren masons on the reconstruction of the statue of Yu'lon at Serpent's Heart.[1] Traveling to Pandaria along with her fellow masons and her personal golem, Koveth, Fenella's team participated in the Great Jade Hunt proposed by Foreman Raiki. Fei told Fenella of a hidden cave to the northwest of Serpent's Heart, and explained that she'd find the richest jade there. However, when Fenella and Koveth arrived, she found that the young pandaren girl had also revealed the location to Carrick and Fendrig.[2]

As her team pressed deeper into the mine, each member Fenella's team encountered illusions and traps related to their past traumas,[3] before encountering a swarm of hungry shale spiders. While fleeing the spiders and leaving her team to their fates, Fenella encountered an illusion of her father, scolding her for leaving her companions behind, and a memory of her stealing the plans of other architects and presenting them to Emperor Dagran Thaurissan as if they were her father's. While no evidence was found of the crime and Fenella's father was ultimately promoted, he lost face with the other architects and got a reputation as a fraud. Fineous went along with the deception anyway so that his daughter wouldn't be branded a thief. The illusion of her father soon returned, scolding her once more, before emptying his pipe and disappearing. Fenella returned to save her fellow dwarves but lost Koveth in the process, the golem having been overrun by the spiders.[4]

Once they'd escaped the spiders, Fenella and the miners found their way into a cavern full of jade and discovered the Scrolls of the Celestials. After reading through the scrolls and learning of the history of the August Celestials and the mogu empire, they took a piece of jade and returned to the celebrating pandaren masons, who were amazed by the beauty of the jade. As Fenella and her two compatriots went to thank Fei for showing them the mine, the young pandaren girl revealed her true form: that of the Jade Serpent, Yu'lon.[5]

Fenella is present in Shadowforge City after the remaining Dark Iron dwarves join the Alliance under Moira.