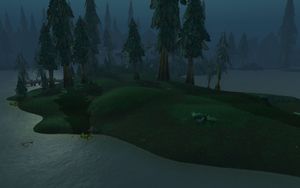 Fenris Isle is a large island located in the center of Lordamere Lake and it is generally considered to be a part of Silverpine Forest. Together with the Dawning Isles, they form a broken circle of dry land in the lake.

Fenris Isle was once home to a thriving military outpost of the kingdom of Lordaeron called Fenris Keep.

When the undead Scourge took the land, Fenris Isle was abandoned, all of its inhabitants either fled or were murdered. The island was then occupied by the Rot Hide gnolls, who took the keep as their base of operations. The Rot Hides were led by their treacherous master, Thule Ravenclaw, who took complete control of the island and the nearby Decrepit Ferry. They were eventually defeated.

Some time later, the island was taken over by Hillsbrad Refugees who had made their way here from ruined Southshore and Hillsbrad Fields. These survivors of the Forsaken attacks would live in peace but for a moment, as agents of the Forsaken along with Agatha entered the island and began killing them and raising them into the undead. Darius Crowley made them an offer they couldn't refuse, either die and join the ranks of the undead or drink his blood and become worgen and continue to fight for the Alliance. They chose vengeance and became Hillsbrad Worgen.

At some point, the keep was overtaken by Deathstalker Hayward, who was later defeated by Alliance champions,[1] with Bloodfang Pack reclaiming the isle for themselves in the process. The Bloodfang were distracted by Horde forces along the Misty Shore, while Forsaken refugees escaped from Tirisfal Glades across Lordamere Lake.[2]

Lordamere Lake contains an island called Fenris Isle on which once held a great fortress known as Fenris Keep, but the structure has sunk into the bog and is now mostly submerged and covered with mud and scum.[3]