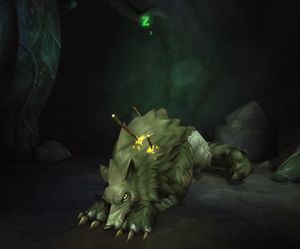 Fenryr is a worg located at the Fields of the Eternal Hunt in the Halls of Valor. He is first found either in the vrykul camp, already captured, or in small cave, surrounded by bears. He retreats to his lair when wounded.

In the Fields of the Eternal Hunt, the greatest vrykul champions keep their skills sharp, competing to see who can fell the largest beast. But man and beast alike give a wide berth to the fearsome worg Fenryr, true master of the Fields, who stalks his prey and pounces with unnerving quickness.

Night of the Wilds

Fenryr was later seen alive during the

Fenryr leaps and shreds his enemies, eventually retreating to his den after becoming wounded.

Intro
Odyn says: The mighty Fenryr stalks these grounds. It will take cunning and guile to slay this beast - a perfect test of your worthiness.

Outro (if beaten after Hyrja)
Odyn says: You have earned my blessing champions! I look forward to meeting you within the Hall of Glory!

A tamable version of this boss becomes available in the cave, after killing Hymdall and Fenryr solo on Mythic difficulty.[2]