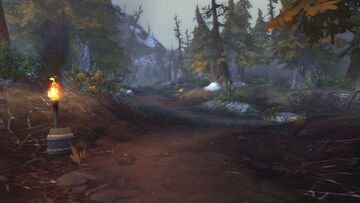 Fernwood Ridge is a forested area west of Algerson Lumber Yard in northern Tiragarde Sound. The ridge is home to a large colony of Mossfang spiders, as well as a population of Ashclaw bears. As the nearby lumber yard expanded, the ridge's wildlife was magically enthralled by a mysterious figure known as the Witch of the Woods, who began using them to attack the lumberjacks.

Under the witch's influence, the spiders and bears of Fernwood began to run rampant. Adventurers of the Alliance aiding Maynard Algerson were eventually sent to deal with the threat, reducing the beasts' numbers and slaying the Mossfang Matriarch.[1] Ultimately, the Witch of the Woods herself was defeated, ending the immediate threat to the lumber yard.