The Fetid Devourer is a boss in Uldir. It is a hydra-like creature made from the corpses of a leonine, reptilian, avian, and equine loa.

The experiments within Uldir conducted tests upon countless lifeforms, including several loa who inhabited the forests around Zandalar. After the experiments proved lethal, the loa's remains were disposed of improperly, much to the delight of the dark consciousness imprisoned within Uldir. 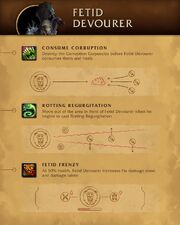 Overview of tactics for the Fetid Devourer fight.

Periodically, Waste Disposal Units around the room will activate, dumping waste into the room and leaving behind Corruption Corpuscles. Players must kill these before they release Enticing Essence, or Fetid Devourer will move to them and Consume Corruption, healing and gaining energy. At 50% health, Fetid Devourer will enter into a Fetid Frenzy.

Princess Talanji yells: What is dis creature?! It appears as if it were once a loa.

Brann Bronzebeard yells: Ach! What in blazes is that thing!?
MOTHER yells: Observation accurate. This facility has run numerous experiments on loa to research solutions for Old God corruption.
MOTHER yells: Tests focused on the ability of G'huun's corruption to reanimate expired tissue. Results were inconclusive and specimens were destroyed.

Princess Talanji yells: You seem to have missed one.