The Scourge can strike anytime, anywhere.

To counter their unpredictability, I sent forces to secure key locations along the southern road heading east, though some time has passed, and I have yet to receive any reports from our scouts in the field.

With the erratic nature of these attacks, I fear the worst.

Travel the road and see what you can uncover. I'll be expecting a full report when you return.

This is far worse than we thought.

Commander Gregor must be told of the true extent of the Scourge's resurgence.

Commander Gregor says: And make sure you bring Lieutenant Vernon up to speed before you return. He will be awaiting your initial reports in Darkshire. 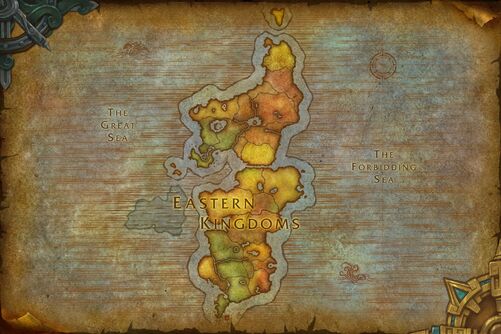 Head south to Goldshire. All seems normal. Speak with Lenna:

We must remain vigilant against the Scourge.

Gregor sent me to gather reports. Do you have any news?

Our patrols report outbreaks of Scourge activity to the east. Our forces are shaken, but holding the line.
I sent a scout to speak with Guard Captain Josephine in Redridge. They have yet to return.
The player receives

Head east to Three Corners, just across the border into Redridge Mountains. Some Bloodthirsty Ghouls are attacking as a Frostwyrm occasionally strafes the area, freezing friend and foe alike!

Gregor sent me. The Scourge... they're already here?

The Scourge's presence continues to grow. Without proper reinforcements, Stormwind may soon be under siege.
Deliver this report. Inform Gregor that the situation is more dire than we anticipated.
The player receives

Head southwest across the bridge to Duskwood. Some more Bloodthirsty Ghouls are attacking. Speak with Fairbanks:

<Guard Captain Fairbanks raises his weapon, aiming it threateningly in your direction.>
You...!
Never sneak up on me like that again! I could have killed you!
What are you doing here? It's not safe!

What? Gather the reports?
Our courier should have reached Stormwind long before now!

They have yet to receive any reports. Give me what you have I'll make sure it gets delivered.

Guard Captain Fairbanks says: You should check up on Vernon in Darkshire. If it's this bad here, I can't imagine what his forces must be facing.
The player receives

Follow the road southwest to Darkshire. The town is under siege by Frostwyrms, Vengeful Geists, Risen Fiends, and Shambling Horrors.

The subject of this section did not make it out of the PTR stages of patch 9.0.1.

Speak with Lenna in Goldshire:

What brings you to Elwynn?

Obtaining the scout report from Crusader Lenna
Our patrols reported a few Scourge sightings to the east, but nothing unexpected.
I've sent a scout to speak with Guard Captain Josephine in Redridge, but they've yet to return.

Obtaining the scout report from Guard Captain Josephine
I'm afraid it's been this way for some time. Without proper reinforcements Stormwind may be next.
Take this report. Tell them it's worse than we thought.

No report has reached the capital. Give me what you have I'll make sure it gets delivered.

Later PTR
I sent our courier on his way hours ago!

They have yet to receive any reports. Give me what you have I'll make sure it gets delivered.

Guard Captain Fairbanks says: You should check in with Vernon and his men just down the road in Darkshire. If it's bad here, I can't even imagine what they're up against.

Completion
This is worse than I thought.

The commander will be expecting a full report.

Gather reports from officers in Durotar and the Barrens.

We cannot anticipate where and when the Scourge will strike.

In order to mount a defense, the Argent Crusade has set up outposts at several key locations. But we have yet to receive word from them.

Seek out my field officers along the southern road. I expect a full report when you return.

The situation appears far more dire than we thought...

Commander Throgg must hear of this.

Speaking with Crusader Thalius
We must not falter against the Scourge.

Commander Throgg sent me to gather reports on Scourge activity. Any news?
Though skirmishes with the Scourge have left us unsettled, our crusaders remain steadfast and vigilant.

Passing travelers have reported seeing the undead near Razor Hill. I sent a scout to investigate, but they have yet to return.
The player receives

Bloodthirsty Ghouls are attacking the guards, and a pair of Riding Wolves are found dead along with their riders Wolf Rider Gruka and Zeg. Occasionally, a Frostwyrm comes and freezes the area.

What do you want?

The Scourge are already here?
We've been under attack since we arrived.

If we don't purge this outpost of rotting flesh soon, we'll be overrun.
The player receives

Mogra is under attack by a Cult Shadowmage.

Wolf Rider Mogra yells: Bring them to their knees! Show them no mercy!

Speaking with Wolf Rider Mogra
I dispatch our riders to Orgrimmar and you're the only reinforcements we get?

Where's the rest of the pack?

Riders? There haven't been any reports from the field. Commander Throgg sent me to gather information.
If they've stopped our riders...

Take this. Our allies must hear of these attacks!
The player receives

The Scourge's behavior is erratic.

In an attempt to counter their efforts, I've dispatched several allies alongside Orgrimmar's finest wolf riders to stop them in their tracks.

You can find our allies along the southern road.

I'll be expecting a full report when you return.

This neverending threat is a lifelong dedication to a just cause.

This information is accurate? This cannot be...

The commander will be expecting a thorough report.