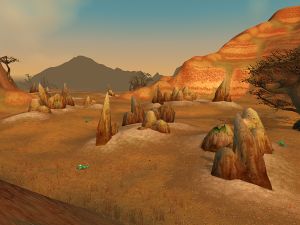 The Field of Giants.

The Field of Giants was once an area found in the southern reaches of the Barrens.

Covering much of the southernmost portion of the Barrens, the Field of Giants lied between Camp Taurajo and the entrance to Dustwallow Marsh. Numerous herds of thunder lizards, kodo, and other varieties of Kalimdorean megafauna roamed this land. The plains were straddled by the southern leg of the Gold Road which was less well defended than the northern reaches — the watch towers that were built to guard it appeared to had been abandoned.

The Horde did not forsaken this tract entirely however — the wise shaman Brine made her home on a ridge on the southern borders of the Field, while Gann Stonespire seeked to avenge his tribe, who were driven out of their village when the dwarves started digging for titan ruins in the land adjacent to their settlement, which is now Bael Modan.

The main concern to those with interests in the region was the recent appearance of silithid hives — the northernmost in all Kalimdor. The troll Korran of the Crossroads and tauren Ruga Ragetotem of Camp Taurajo[1] tasked Horde adventurers with investigating this incursion.

After the Cataclysm, the Horde and the Alliance built the Desolation Hold and Fort Triumph respectively, battling in this area and transforming it into a battlefield known as the Battlescar.

It is rumored that a race of massive arachnids lives within the towering dirt columns that litter this site. Some see the presence of these silithid as the first stages of an invasion, suggesting that the insects possess a degree of intelligence. When viewed from afar, the tall dirt towers resemble giants, providing the area with its name.[2]

In the south Barrens, near the Thousand Needles, spreads an open plain where termites have constructed hundreds of mounds, some towering more than 60 feet tall. The tops of these spires are popular perches for lions that keep watch over the surrounding terrain and prey upon those passing below. The misshapen mud pinnacles take the vague form of giants, hence the name.

Centaur consider this a holy place, with tribes making regular journeys to leave totems upon the field. A popular sport among young tauren involves stealing centaur offerings and even leaving insulting icons in their place.[3]

The area was split into Battlescar, Desolation Hold, and Fort Triumph.