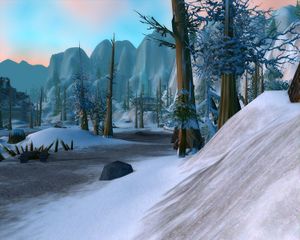 Field of Strife as seen from Iceblood Garrison.

It was previously occupied by NPC forces from both Stormpike Guards and Frostwolf Clan. Those NPC forces have since been removed. Since their removal, very little fighting actually takes place in the Field of Strife because it lacks strategic value. However, this area is still used to summon Ivus the Forest Lord and Lokholar the Ice Lord. Fighting would often occur here before and during the summoning.