Fields of the Eternal Hunt 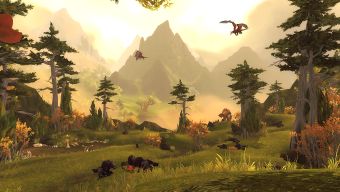 Odyn's Fields of the Eternal Hunt

The Fields of Eternal Hunt are a section of the mythical Halls of Valor, the home of the Valarjar. Unlike much of the rest of the Halls, this is a large, outdoor area filled with lush vegetation and abundant game. Here, Odyn's chosen train and compete in hunting great beasts.[1] The area itself is reminiscent of the landscape of Stormheim, and can only be accessed through the Ephemeral Way. The Envoy of the Hunt is charged with seeking out worthy animals for the hunting grounds.[2]

The fields are the setting of an event known as the Night of the Wilds, where the spirits of the great beasts of legend rise in the fields to be faced in combat. During the third invasion of the Burning Legion, Odyn would invite the Huntmaster of the Unseen Path to attend.[3]

At this time also, a group of champions would venture into the Fields as part of their quest to prove themselves worthy to Odyn and recover the Aegis of Aggramar. There, they confronted the monstrous worg known as Fenryr that ruled the fields, eventually slaying it in combat.

As Fenryr is seen alive during the

[110] Night of the Wilds, it is possible that animals within the fields are reincarnated or resurrected to provide game for its namesake, eternal hunt.