Fiona is a worgen quest giver in the contested territory of Eastern Plaguelands in Lordaeron and later in Shadowmoon Valley on Draenor. She can be first found near the bridge to Western Plaguelands and at the entrance to the bog near the Draakorium. Fiona is a loyal companion who never loses her way.[1]

In the Eastern Plaguelands, the adventurers traveled alongside her caravan to various locations performing various tasks for her and her companions, eventually settling at Light's Hope Chapel. 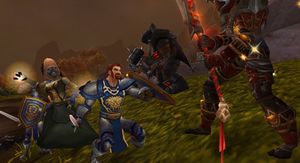 Fiona fighting against the Iron Horde.

Her caravan later followed the Alliance into Draenor, specifically Shadowmoon Valley, composed of pretty much the same members as before save for Pamela Redpath and Vex'tul, with Talren Highbeacon as a new addition. After passing through the Draakorium and near by the Blademoon Bloom, Rimblat Earthshatter, Argus Highbeacon and Talren are captured by the botani and Gidwin Goldbraids is poisoned.

Back at the Draakorium a few hours later, the Alliance commander was informed of the botani aggression and that the caravan could be in danger. After catching up to them, the commander helped them find a cure, rescued the prisoners, and ran errands for Beezil Linkspanner so he could make some profit from the native draenei females' obsessions with their horns' appearance.

Afterwards, Fiona spoke with the rest of the caravan, and they agreed to rest their wagon for a while, thus allowing her to repay the commander by joining their forces at Lunarfall. Later on, Fiona can be seen again, by Alliance players, outside Bladefury's Command, Talador, as part of the Lunarfall forces fighting the Iron Horde in the battle that preceded Azuka Bladefury's fall. She can also be seen watching fights between garrison commanders in the Coliseum of Highmaul.

Fiona and her famous stagecoach can be found at the harbor in Boralus, the capital city of Kul Tiras.

She is involved in the following quests: